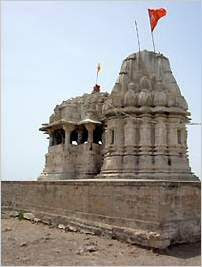 Mataji (Deity) temple is situated on the top and bottom of Koyla Hill near Dwarika.
One can visit the temple on the way back from Dwarka. It is about 70 KMS from Dwarka while coming towards Jamnagar in Gujarat.

Before about 2000 years, the capital of the Chavda Kingdom was Minalpur, there the king was Prabhat sen Chavda. This minalpur was a main port and trading used to be done with foreign shores.

Once during the holy festival of Navratri, the 7 wives of Prabhatsen were playing garba. So Jagdamba Mataji from the Koyal hill, also doned ornaments and fine clothes and took the appearance of a beutiful lady, came down to play the Raas.

King Prabhatsen who was watching the festivities from the palace got attracted to this fine lady and the flames of evil passion got ignited in him, so in the late night, when Mataji started going back to the hill, he started to follow her. Looking at this she got angry and cursed him and told him to come every night to the temple to be eaten alive.

So every night, the King had to go to the temple to be roasted alive in the fire pit and to be eaten. The next day she would make him alive and send him back to his palace. This daily curse had taken its toll on King Prabhatsens health and he became very weak and thin.

During that time, the maternal cousin of prabhatsen, the Great King, Vir Vikramaditya came on the pilgrimage of Dwarka and became his guest. On seeing the condition of his cousin, King Vir Vikramaditya asked for the reason and he was told this tale of tourture. So the great king vikram decided and took the appearance of Prabhatsen and went for fullfilling the curse of his cousin. Seeing show of love and courage pleased Mataji, so she granted a wish to him. King Vikram asked for 2 wishes. 1. to relieve his cousin of the curse and 2. to become his guest at the capital city Ujjain of his kingdom of Malvan. She granted his wishes.

But about accepting his wish about her visit to Ujjain, she kept the condition that she would follow the his caravan on foot and she forbade him to look back and check whether she was coming or not which he agreed and he looked then Mataji will stop at that point only. On reaching the outskirts of his capital city of ujjain on the banks of river Shipra, King Vir Vikramaditya out of curosity looked back and thus Harshidhi Mataji stopped there itself.

Even today the Temple of Harshidhi Mataji is still there and It is said that since then, Mataji goes daily there for night stay and comes back to Koyla hill during the day. On the northern side of the temple is the fire pit, where Harshad Mata used to roast and eat the King of Minalpur Prabhatsen.

Its a very special place for Jamnagari people, Even today many people walk from city to this temple ( this temple is 120 KM from city )

This is different from The Harsiddhi temple in Ujjain which is one of the fifty Shakti peethas where the Kurpara(Elbow) of Devi fell.

Thanks for the story behind the temple