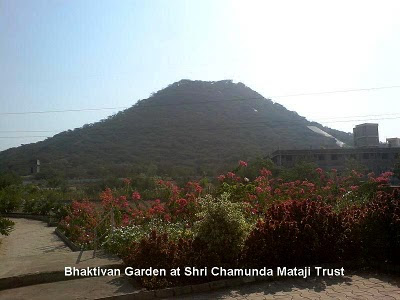 The story is when Demons Chand and Mund came to conquer Devi Mahakali and in the fight that ensues, the Devi cut their heads and presented these to Maa Ambika, who in turn told Mahakali that will be worshipped as Chamunda Devi.

Mataji temples are always located at the top of the hills in India and the reason for this is that if you want darshnas of Mataji, you will have to undergo some physical strain.

There about 700 stoned steps up to the top of the hill. These steps were not covered by the shade before about 5 years. However, a good shade and railings now cover the entire walkway thus providing comfort to all the pilgrims. Famous industrialists, Ambani brothers of Reliance industries have donated this covering and the shades on the hill.

During the navaratri festival, a big havan is taking place on top of the Chotila hill. It is said that after the aarti at chotila hill in the evening everybody comes down the hill and that no one stays there that's what Chamunda Mataji has said. Also people have encountered that there is a lion on the hill or dungar of chotila.

i have been to this holy place quite a few times. its very nice place. jay mataji...

Nice blog to gather and present informatoin of Mataji, I would like to correct one information that the Chotila is a taluka place of Surendranagar District and not of Rajkot district.