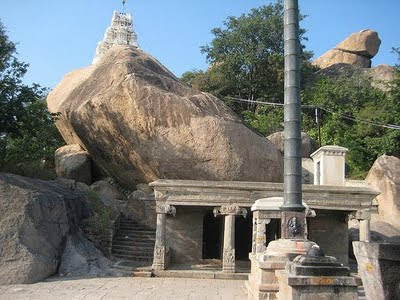 Valli Malai is situated in North Arcot district near the town Walaja. There is a Murugan temple for Lord Muruga along with Valli and Devayanai.

Behind the temple there is a kulam Saravana Poikai. Near the kulam there is a Valli temple also. On the top of the hillock there is another temple for Lord Muruga. One has to climb 444 steps to reach this temple that is carved in a single rock. On the steps there are a number of resting mandapams. Out of the many canopies one of them is still not renovated. When they tried to renovate it, Mr. Arunachalam, Mr. Apathurai and Kripananda Variar tried to remove the stone. When they had smoke incense smell coming from the chamber below the stone they had the vision of siddhas and rishis seated in yoga posture. All the three had a shock and became unconscious. From that time the stones were closed and this particular canopy has been left as it is without renovation. There are a number of stories about this.

Here Valli Devi has importance from very ancient time many siddhas lived on this hill. In fact one may call it a Siddha Bhumi. On top of Valli Malai near the ashram there is a place where Valli made a paste of turmeric for taking bath. Nearby is the place where Murugan took the form of a tree. Valli Malai Swamigal removed what remained of the tree and made it into a water pool.

Near the Valli Malai rock temple the asramam is situated. Swami Satchidananda accepted Tiruppukazh as the Veda Mantra and taught all with music. In 1950 he attained samadhi. This samadhi is made of a single rock. Presently this asramam is administered by Sri Balananda Swami.

Siva-Visnu
On the top of the hillock there is a Siva lingam called Tirumal Gireeswara. Here Vaisnavism and Saivism commingle. After the puja the priest blesses the devotees with sadari proving that this is a Vaisnava site. 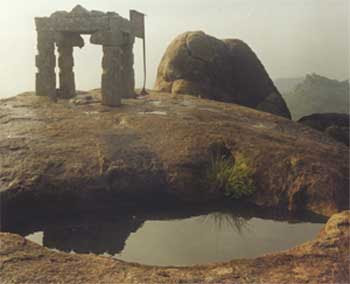 Kumari Teertham
On the west of the asramam, there is a spring which is called Suriyan Kanaa Cunnai, meaning the pond that does not see the sun, i.e. the sun's rays never touch it. The story goes that Lord Murugan came as an old man and asked Valli to give honey and tinai maha (millet flour) to eat. On eating the same he had hiccups and asked for water from a pond which does not get either sun rays or moon rays. The water is perennial and is considered as Ganges water. There are references about this spring on palmyra leaf sources. Young women sprinkle this water on their head and pray to Valli for a good husband.

Valli and Devasena and temple history

Maha Visnu's daughters were Valli and Devayanai. They wanted to have a husband who will never get angry. They performed penance and Lord Muruga appeared before them. Both of them wanted to get married to them. He said that Devayanai will be married as daughter of Indra and Valli to Veddas and then he will marry them.

After destroying Surapadma, Lord Muruga restored the Indra Loka to Indra As a gift Indra gave his daughter Devayanai to Lord Murugan in wedlock. Valli was born on Valli Malai and brought up by Vedda king Nambi Raj. Valli and Lord Muruga played a lot of leelas for nearly twelve years and ultimately married. This hillock where Valli was born therefore gets the name Valli Malai.