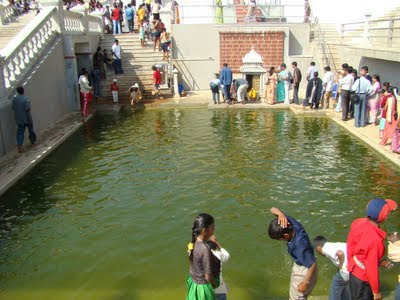 Location : Located in the Brahmagiri hill, in the Kodagu district near Bhagmandala.

Talacauvery is presumed to be the origin of the Cauvery River. A tank had been built here and it is supposed that the Talacauvery received water from here. Talacauvery is an important religious place, as a holy kundike is believed to have been emerged from a small permanent spring. Today, however, the source has dried up. Cauvery continues to flow and is considered a holy river by most of the South Indians. A small temple had been built to mark this place.

This temple in Talacauvery is frequented by the local worshippers. During special occasions people take a dip in the holy river. A lot of religious and historical significance is associated with this place. Talacauvery in Karnataka is situated at 1276 meters above sea level. People from all over the world come to this holy place to witness the origin of Cauvery. This river is the lifeline of South India. As a traveler one can check out the temple located near Talacauvery. The shrine is dedicated to Lord Agastheeswara. The temple establishes a link between Cauvery and Agasthya muni (hermit).

As is the case with many of the religious places throughout India, Talacauvery too has many popular legends associated with it. According to the legend Agasthya had Kavery in his kamandalam. Ganesha took the form of a crow and toppled the water. He then quickly reverted back to a small boy. The sage thought it was some naughty kid who was playing a prank on him. In his rage he tried to strike Lord Ganesha. When the lord showed himself the sage was bewildered. As penitence, he knocked his own head.

Lord Ganesha is also related to Banavasi in establishing the Ranganatha Temple in Srirangam. As a result these temples are dedicated to him.

Numerous pilgrims from across the country visit Banavasi in Karnataka on Tulasankramana day. They come here to see the miraculous spring active again. The water too gushes out at a fixed moment. It is also considered that the tula snanam will be quite holy during this time. As a result is this bath is performed by several people throughout the pilgrim town by the banks of the river Cauvery. Idols of Lord Shiva, Brahma, Vishnu and Ganesha are also to be found here.

From Mysore, this could be done as a 2 day trip. First day ,one can visit Tibetan monastery / Cauvery Nishadharma Followed by a halt at Madikeri (Mercara, also known as Scotland of India ). From Madikeri it's 62 kms Via Bhagamandala(Yet another Temple with religious importance)and in this Stretch road is Good and so scenic.