The Areopagus or Mars Hill 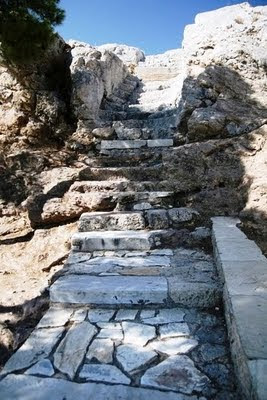 Name : The Areopagus or Mars Hill or Hill of Ares; Areios Pagos

According to Greek mythology, Ares was tried in a court of the gods on this hill for the murder of Poseidon's son Alirrothios. Another legend says that the hill was the site of the trial of Orestes for killing his stepmother and her lover, Clytemnestra and Aegisthus.

In pre-classical times (before the 5th century BC), the Areopagus was the council of elders of the city, like the Roman Senate. Like the Senate, its membership derived from those who had held high public office, in this case that of Archon. In 462 BC, Ephialtes put through reforms which deprived the Areopagus of almost all its functions except that of a murder tribunal.

In classical times, the Areopagus functioned as the chief homicide court of Athens. At the foot of the Areopagus was a temple dedicated to the Erinyes, where murderers could find sanctuary.
In the Bible

The Areopagus, like most city-state institutions, continued to function in Roman times, and it was then that the Apostle Paul delivered his famous speech about the identity of "the Unknown God." According to the biblical account (Acts 17):

A group of Epicurean and Stoic philosophers began to dispute with him. Some of them asked, "What is this babbler trying to say?" Others remarked, "He seems to be advocating foreign gods." They said this because Paul was preaching the good news about Jesus and the resurrection.

Then they took him and brought him to a meeting of the Areopagus, where they said to him, "May we know what this new teaching is that you are presenting? You are bringing some strange ideas to our ears, and we want to know what they mean. (All the Athenians and the foreigners who lived there spent their time doing nothing but talking about and listening to the latest ideas.)

Paul then stood up in the meeting of the Areopagus and said: "Men of Athens! I see that in every way you are very religious. For as I walked around and looked carefully at your objects of worship, I even found an altar with this inscription: TO AN UNKNOWN GOD. Now what you worship as something unknown I am going to proclaim to you."

...When they heard about the resurrection of the dead, some of them sneered, but others said, "We want to hear you again on this subject." At that, Paul left the Council. A few men became followers of Paul and believed. Among them was Dionysius, a member of the Areopagus, also a woman named Damaris, and a number of others. 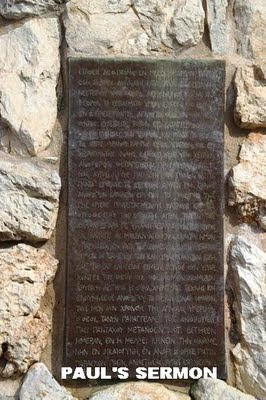 The Areopagus is a bare marble hill across from the entrance to the Acropolis. Its ancient marble steps can be slippery, especially in the rain. Wear appropriate shoes. Near the base of the stairs is a bronze plaque with the Greek text of Paul's sermon. At the top there are nice views of the Acropolis.