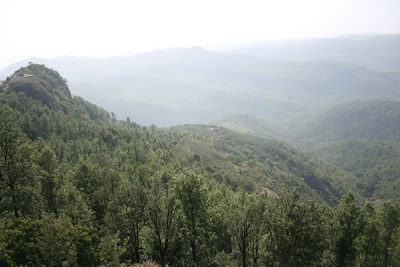 On top of the Servarayan hill stands the Servarayan temple in which Lord Servarayan resides with his consort Kaveri. This deity, the local people believe, is the guardian angel for the 67 villages in and around Yercaud. This temple is inside a cave and one has to bend and go in. People go inside in batches of three.

The cave extends beyond the temple and the locals say it extends all the way to the Kaveri in Karnataka, a distance of 480 km. Very few have explored the full cave.
After 3 km. it is pitch dark inside the cave; no ventilation; snakes all over. it is believed some saints, in the days gone by, had travelled the full length. Tippu Sultan was supposed to have hidden in this cave during a war.

To the south east of the temple is a very old well and it is a wishing well!
The locals believe if they are able to throw at least one stone, from three picked up from the temple, inside the well, with their backs to the well, they will succeed in whatever they plan to do.

If one walks down from the Temple, one reaches Killiyur falls. Water, falls from a height of 300 m. During the rainy seasons, the locals say, these falls are very dangerous. Next to the Servarayan temple is the Raja Rajeswari Amman temple. There is also the Jothi Samadhi ashram. The massive Rajarajeswari idol is installed in a sitting posture, and 4.5 feet tall. One can buy prasad, gem stones and lucky stones. There is also a hall for meditation. One can get a full view of Namakkal and Salem from the "Ladies Seat". The Anna Park is a quiet place to relax.

One of the important places in Yercaud is the Pagoda point. The Pagoda Point, is so known because a number of pyramid-like structures abound here. The Anjaneya temple is believed, by the locals, to be very powerful. One can get a full view of Salem from here. The one kilometre lake is surrounded by trees all round. It is a pleasurable experience to go boating in this lake.