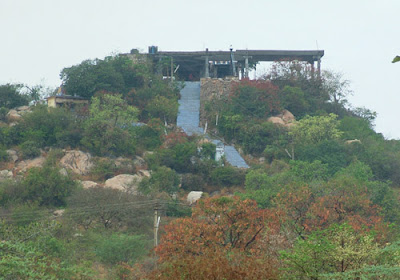 Many years back, a woman devotee was praying to Lord Ratnagiri Muruga for long years seeking child boon.  She was undergoing severe fasting for the boon.  One day, she came to the temple alone when no one was present in the surroundings.  She was in deep meditation for a long time shedding tears and was going round the temple.  A cow boy enquired her of her sorrow.  The woman told him of her want.  The boy gave her a little sacred ash and advised her to go round the prakara with her prayer.  After finishing the first round, when the woman wanted to see the boy, he was not there.

The woman conceived within a few days then and understood that the boy was no less a person than Lord Muruga Himself.  The temple has the reputation of blessing a woman devotee in person  gifting her wish.

Lord Sri Muruga graces with four hands on His peacock facing the left side.  Lord Vinayaka – Swayambu Vinayaka from a rock – is by the side.

It was customary in days of yore, that boys and girls related to each other qualifying a marriage liberty (Murai Mappillai and Murai Penn) visit the temple together on Mattu Pongal day (almost on January 15 according to the Gregorian calendar).  The bridegroom-boy will offer the flowers to his fiancée.  They will then offer garlands to the Lord with the prayer to unite them in wedlock.  The custom has vanished in the modern days.  Yet, lovers aware of the custom visit here to pray to Lord Muruga to succeed in their love affair.

The belief still remains that any one bringing flowers, making a garland himself/herself and offer it to the Lord will have the life partner of his/her choice.  After marriage, they come again to offer their grateful prayer to the Lord to have wise children.

Also, school friends, though placed in different places due to their occupations, use to come to this place, pray to Lord Muruga and share their old experiences.  The tradition is still followed, on the Mattu Pongal day.

Temple Speciality is Lord Swayambu Vinayaka appearing from a rock graces in the temple.
A demon performed penance for centuries on Lord Shiva and got the boon to rule all the worlds. Intoxicated by the power of the boon and his prowess, he began to harass the devas very cruelly forcing them to live in oblivion.  Once the demon saw Indira, the king of devas in his hideout.  Indira began to run but the demon chased him.  Indira reached this Ratnagiri mount where Lord Muruga changed him as a peacock, his vehicle.  The demon returned disappointed.  The wonder took place here, according to scriptures.

Thaipoosam in January-February, Mattu Pongal falling almost on January 15, New moon days, Kruthika days, Vaikasi visakam in May-June are the festive days observed in the temple with special pujas. The temple is open from 6.00 a.m. to 2.00 p.m. and 4.00 p.m. to 7.30 p.m.