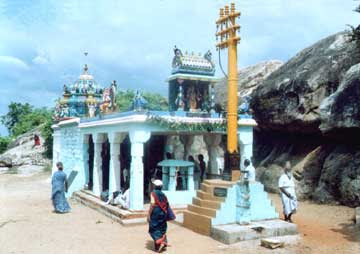 Until recently the celebrated Jñāna Malai (Mount of Wisdom) could not be identified. Lord Jñāna Murugan only recently disclosed His presence at Jñānamalai situated near Kaverippakkam in Vellore district at a small village called Govindacheri 14 kilometres from Kaverippakkam. Though it a small hillock, yet there is no easy way to reach the top of the hill.

There is a small Murugan temple on this hill. In 1998 some local people along with Archeological Department officials discovered a worn stone inscription which translated affirms:

"...in the 18th year of King Sambuvarayar's rule, his son Prince Kaligarayan established steps to reach Jnānamalai of this village..."
The period is established as AD 1322-1340. On seeing this news item in the newspaper Dinamani our tiruppugazh thondar Ra. Krishnan, the author of several books including Arunagirinathar Adicchuvattil (In the Footsteps of Arunagirinathar), visited the site, conducted research and established conclusively that this sthalam is indeed Jñāna Malai celebrated in the songs of Saint Arunagirinathar.

Hectic activity followed, and last year some abishekams were performed by our Siruvapuri Murugan Abishega Committee and on 15 September 2000 kumbhabhishekam was performed after moderate renovation by the villagers.

There is a small temple in typical Pallava style on the hill with a small sanctum and a mandapam. The Lord is in the form Brahmasastā having rosary and kamandala in two hands. The other two hands are in abhaya mudra and resting upon the hip. Generally in Thondai Mandalam (north Tamil Nadu) Pallava and early Chola images conform to this Brahmasastā form. About three feet high with Valli and Devasena as consorts, these are beautiful moolasthana vigrahas. He is called Bālasubramanyar by local people.

Near the temple there is a small natural water source from which water is brought for temple abulations. On to the west there is a small Siva temple and behind we can see footsteps in the rock. They appear as footprints on molten lava. Incidentally this is a volcanic mountain from all appearances.

These footsteps are considered by the local folks as those of Lord Muruga Himself. There is also a belief that Murugan visited this place after marrying Valli Amman in Vallimalai on way to Tiruttani. Tiruttani and Vallimalai form form a triangle with Jñāna Malai and both can be seen from this hill. Around the hill there is a lake and in rainy season will look like an island.

Arunagirinathar came to Jnanamalai and recalled "his experience of being hated by his wife, own family members and local folks, decides to end his life and at that time Murugan shows His lotus feet and bless him. He wants the same blessing again." This internal evidence of the saint's life is found only in the Tiruppugazh of Jñāna Malai.

In order to facilitate worship this important Murugan temple we need to provide steps and other basic amenities.

Siruvapuri Murugan Abishega Committee members have decided to construct the steps as well as other facilities. As a first step on 19 August 2001 in the presence of Mr. T.R. Srinivasan (I.A.S.), Special Commissioner for Hindu Religious Charitable Endowments of the Government of Tamil Nadu, a foundation stone was laid and the formal inauguration of this great task was undertaken with the blessings of Lord Jnanamalai Murugan. For about five hours Thiruppugazh Anbargal sang tiruppukazh followed by abhishekam and annadanam. Hundreds of people attended this great event.

Murugan adiyars who wish to contrbute to this great cause are strongly encouraged to make material contributions. The hill needs about 225-250 stone steps to reach the summit. Each stone step costs about Rs. 2,000 (or US$ 42) to construct. In addition we intend to construct a small mandapam for the devotees in front of the sannidi and also other basic facilities (cooked food for annadanam is brought from Chennai currently). There will also be two small stone mandapams for pilgrims to rest on the way up and one at the foot of the hill as well. 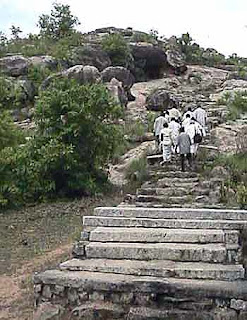 Murugan adiyars and Kodaivallals are welcome to contribute liberally to the noble cause of steps. With each step, you will be drawn one step closer to Jñāna Malai Jñāna Panditan.