Garjia temple is situated in the Ramnagar – Ranikhet Route around 14 Kms from Ramnagar. On the elevation of a huge rock in the midst of river Kosi, there is a beautiful temple of Durga Devi named as Garjia Devi.

The Garjia Devi Temple is famous for its faith. The Holy Kosi river flows in front of the temple. It is believed that the temple flowed to its current place with a flood in the river Kosi.  Bhairav when saw it floating wanted to stop it but could not do so. Bhairav then asked Goddess Parvati to stay with him at the same place. It is said that this place was earlier covered with dense forests. The people living here saw Goddess Parvati’s idols on the mountains. Seeing the sights of these idols, the commoners built Garjia Devi’s tempele here. 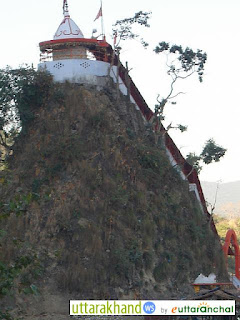 In addition to this, people visit this place on the auspicious occasion of Shivaratri in huge numbers. On the occasion of Kartik Purnima, a special  bath in the river Ganga is organized and a large number of devotees take a dip in the river Kosi. The atmosphere of the temple is a sight on the occassions of Uttarayan, Navratri and Ganga Dussehra. Devotees from all parts of the country visit this place. 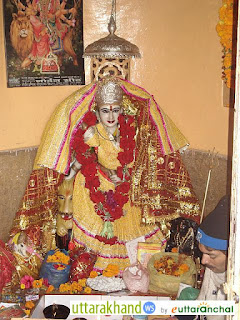 The temple comprises of various idols of Goddess Parvati, Baba Bhairon, Lord Shiva, Lord Ganesha and Goddess Saraswati. Baba Bhairon is worshipped after Devi Garjia puja. It is believed that Devi Garjia blesses the devotees only after the completion of Baba Bhairon’s puja.

Devotees have their full faith in the pilgrimage site and the temple. People coming here are never tired of praising Devi Garjia. It is believed that Devi Garjia blesses her devotees and fulfills their wishes. People usually dedicate umbrellas and bells to Devi Garjia once their wishes are fulfilled.