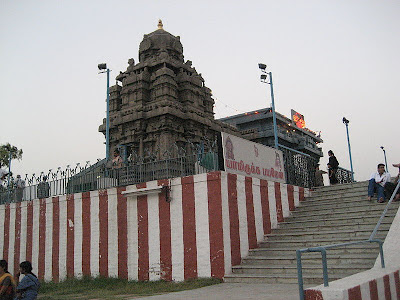 
It was a time when the South Indian population of Delhi was just a handful. An ardent devotee of Lord Swaminatha, who was worshipping an emerald idol of the Lord given to him by Bhagawan Ramana Maharshi, organised jpublic celebration of Śrī Skanda Shashti, the conquest of Lord Muruga over the demon kings (the triumph of good over evil) for the fierst time in the year 1943. As the years went by, the South Indian population increased manifold and the Shashti festival became very popular. The attendance swelled into thousands and the need for a temple began to be keenly felt

The search for a suitable elevated place commenced in 1961. In a dream to a devotee, a small hillock was indicated as His would-be abode by Lord Swaminatha Himself. The mound was in the heart of a vast thicket of berry trees. There was only a tiny village, Vasant Gaon, in the vicinity.

Undeterred by the remoteness of this spot and little realising that it would one day become the hub of a vast residential colony, the organisers went about their task for the erection of a temple with earnestness and devotion. The site was first cleared by the Department of Archaeology as suitable for erecting a temple.

In 1965, the foundation stone for the temple is laid by M. Bhakthavatsalam, Chief Minister of Tamil Nadu, at a function held under the presidentship of Sri Lal Bahadur Shastri, then Prime Minister of India.

On June 2, 1967, the Sila Sangrahanam (stone acquiring) ceremony for the Moola Vigraham of Lord Swaminatha was performed at Tirunelveli. With blessings of the Sankaracharya of Kanchi Kamakoti Peetam and Arulnandi Tambiran Swamigal of Tirupanandal, the stone for the main idol of Lord Swaminatha was located and lifted from the bed of the Tambaravaruni River. It appears that the present moolavigraham in Śrī Subramania Swami Temple on the seashore at Tiruchendur was carved out sixty years earlier from another portion of the same bedrock. The Tambara Varuni stone was brought to Mahabalipuram for making the moolavigraha . It took nearly thirty months to sculpt the idol of Śrī Swaminatha. In April 1970, the idol was taken to Kanchipuram to be blessed by His Holiness the Sankaracharya Śrī Chandrasekarendra Swamigal.

Early in 1973, the temple was ready for consecration. On the invitation of the Samaj, His Holiness Jagadguru Sankaracharya Śrī Jayendra Saraswati Swamigal of Kanchi Math undertook a padayatra of 2,400 kilometres from Kanchipuram to Delhi via Tirupati, Hyderabad, Nagpur, Jhansi, Gwalior, Agra and Mathura, covering a period of four months from the middle of February 1973 to early June of that year. On June 4, 1973, the Jagadguru performed the Yantra Sthapana ceremony. The Maha Kumbhabhishekam on the 7th June 1973 was acknowledged to be the biggest event of the decade.

Built on top of the 90 feet high hillock at a cost of Rs. 14 lakhs, the temple of Lord Swaminatha has several unique features. this is the only temple where Brahmasthana Prathista has been done. Deities delineated in human form are not normally house in the Brahmasthana or the very centre of the garbha graha. Lord Skanda is an exception. The shrine has become famous as Sahasrara Kshetra and has been sung by poets as the seventh Padai Veedu. The six important shrines of Lord Subrahmanya at Tiruchendur, Tirupparankundram, Swami Malai, Palani, Pazhamudircholai and Tiruttani represent the six centres (cakras) Mooladhara, Swadisthana, Manipuraka, Anahata, Visudhi, and Agyaya. The Sahasrara of Brahmarandhra Kshetra was missing all these centuries and Uttara Swami Malai has filled the void.

This Uttara Swami Malai is the one shrine which has been visited by the Sankaracharyas of all the five maths: Bhadri, Dwaraka, Kanchi, Puri and Sringeri. This is also the only temple where the Sarva Vasikarana Yantra is embedded under the deity. This yantra is the strong magnet attracting all irrespective of caste, creed, race, religion or nationality to this great shrine.

The main temple within the complex, formally called Sree Swaminatha Swami Temple, houses the sanctum sanctorum of Lord Swaminatha. It is situated atop a small hillock overlooking R.K. Puram and Vasant Vihar in South West Delhi. This is in keeping with the tradition of locating Murugan temples on hills. The sign outside the main temple is written in Tamil, proclaiming Lord Swaminatha's motto, "Yaamirukka Bayamain" meaning "Why fear when I am there?". The temple is built entirely of granite, and is reminiscent of the Chola style of South Indian Temple Architecture.

While the Swaminatha temple had adopted the Chola style of architecture, the Sree Sundareswara Temple has adopted the Pallava style and the Devi Meenakshi temple the Pandya style. Thus, the Uttara Swami Natha Malai is a unique blend of all the three ancient and renowned styles of South India temple architecture and sculpture.

Since 1990 a temple hall for Adi Sankara has also been constructed on the premises of Uttara Swami Natha Malai. Today one may say without any gainsaying that a magnificent effort has been made to bring the glory of South Indian temple architecture and sculpture to the North.


In the Hindu religion, the peacock is considered Lord Swaminatha's mount or vahana. Accordingly, the temple has adopted a peacock as its pet. This peacock can seen and heard among the trees and foliage within the temple compound.