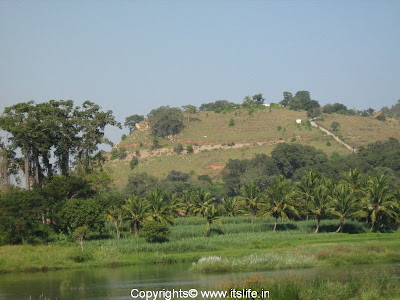 Karighatta is a hill situated a few kilometres outside the 'island' town of Srirangapatna. It is situated off the Bangalore-Mysore road just before Srirangapatna in Karnataka. 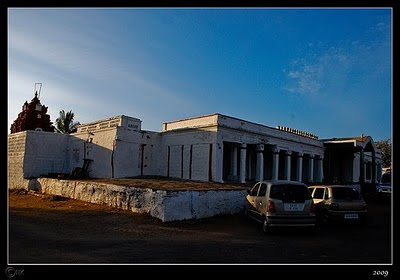 It is referred in Varaha Purana as ‘Neelachala’, a Sanskrit word, which means 'Blue Mountain.'. It is believed that performing some aesthetic poojas (worship) at this temple could bring a lot of relief to the sufferings one may have gone through in life.

It is said that the hill got its name after a wild elephant, Kari attacked and killed four girls taking bath. To bring them back to life Sage Kutsamuni undertook a rigorous penance and requested the Lord to save His devotees.

Another legend has it that during the building of the bridge to Lanka to bring back Sita, Sugreeva brought this hillock, also called ‘Neelachala’ from Tirumala (Thirupathi). On his way several Vishnubhakhtas (disciples of Lord Vishnu) pleaded with him to leave it here and so the hill remained here.

In "Varaha Purana" it is said that when Lord Vishnu took the incarnation of Varaha and shook his body some of the body hair fell on the ground near here the grass now seen here is believed to have come from his hair. Even now at the temple premises, there are sharp grasses, Eragrostis cynosuroides locally known as Dharbe hullu(grass) in Kannada, which is used for performing all sacred rites.

“Kari” in Kannada means black and “Ghatta” means hill. The hill has a Hindu temple devoted to a form of Hindu god Vishnu, called "Karigirivasa". This deity is also referred to , "Lord Vaikunta Srinivasa" or “Lord Srinivasa”, also named “Bairagi Venkataramana”. The epithet ‘Bairagi’ for this idol is derived due the fact that when ‘alankara’ (flower decoration) is done to the deity, the deity looks like a Bairagi (mendicant). The hill stands at a height of 2697 feet above sea level. It supports dry scrub jungle and many tamarind and gooseberry trees are found around the temple. A small river, Lokapavani, a tributary of Kaveri flows by the hill. 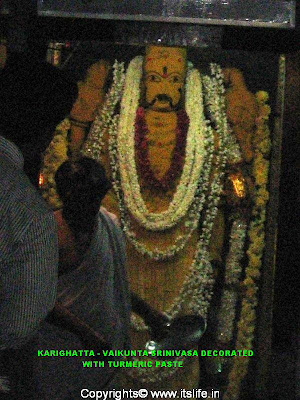 The main entrance to the temple, with huge wooden doors opens into a large quadrangle, which is the main shrine for Vaikunta Srinivasa in black stone, flanked by Yoga Srinivasa (without his consort) and Bhoga Srinivasa idols. The temple of Goddess Padmavathi is on the western side. Facing the main temple is a statue of Garuda and a Garudastamba.There is also a Kalyanamantapa (marriage hall) which is used for performing marriages and other functions. It is believed that the great sage Bhrigu has done the Prathishthapana (installation ceremony) of the deity.

The hill may be climbed by stone steps (450 in number). A winding paved road may also be used. The stone steps lead to a flat land where the temple stands. The hillock has a view of Srirangapatna and Mysore. The beautiful landscape around the hill and the confluence of Kaveri and Lokapavani rivers can be seen from atop the hill.

A stone Vishnu Pada/footprint of the lord is present behind the temple. 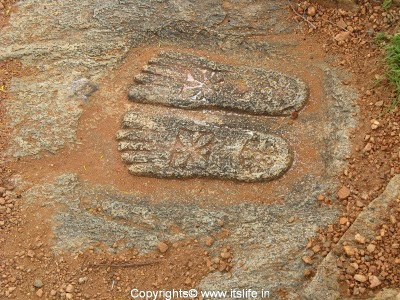 The famous Nimishamba (the incarnation of Parvathi, the goddess wife of Lord Shiva) temple is on the opposite bank of the Lokapavani river.It is a belief that Parvathi will clear all the problems and troubles of her devotees within a minute (nimisha in Sanskrit).

It was on this hill that the British had placed their cannons during the siege of Srirangapatnam.

The traditional car festival held every year is believed to have been initiated by sage Vaikhanasa as early as the Treta Yuga. This practice is being continued and annual fair takes place during Kumbha Masa Palguna (February-March), when a large number of pilgrims attend.

doing a great job,giving amazing information about our holy places.