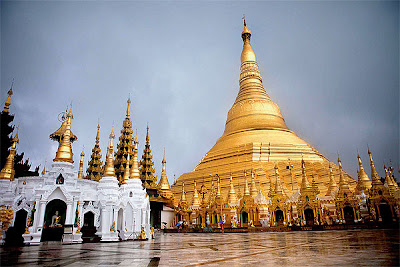 This is a 98-metre (approx. 321.5 feet) gilded stupa located in Yangon, Burma. The pagoda lies to the west of Kandawgyi Lake, on Singuttara Hill, thus dominating the skyline of the city.

According to legend, the Shwedagon Pagoda is 2500 years old. Archaeologists believe the stupa was actually built sometime between the 6th and 10th centuries by the Mon, but this is a very controversial issue because according to the records by Buddhist monks it was built before Lord Buddha died in 486 BC. The story of Shwedagon Pagoda begins with two merchant brothers, Taphussa and Bhallika, from the land of Ramanya, meeting the Lord Gautama Buddha and receiving eight of the Buddha's hairs to be enshrined in Burma. The two brothers made their way to Burma and with the help of the local king, King Okkalapa, found Singuttara Hill, where relics of other Buddhas preceding Gautama Buddha had been enshrined. When the hairs were taken from their golden casket to be enshrined some incredible things happened:

" There was a tumult among men and spirits ... rays emitted by the Hairs penetrated up to the heavens above and down to hell ... the blind beheld objects ... the deaf heard sounds ... the dumb spoke distinctly ... the earth quaked ... the winds of the ocean blew ... Mount Meru shook ... lightning flashed ... gems rained down until they were knee deep ... all trees of the Himalayas, though not in season, bore blossoms and fruit "

The stupa fell into disrepair until the 14th century when the Mon king Binnya U of Bago had the stupa rebuilt to a height of 18 meters (60 ft). It was rebuilt several times and reached its current height of 98 meters (320 ft) in the 18th century. The Mon kingdom possessed two great pagodas of especial sanctity, the Shwemawdaw at Bago and the Shwedagon.

Originally only twenty-seven feet high, it was raised to a height of sixty-six feet in 1362 by King Binnya U as an act of special piety. Dhammazedi's immediate predecessor, his mother-in-law Queen Shinsawbu (1453–72), raised its height to 40 meters (129 ft). She terraced the hill on which it stands, paved the top terrace with flagstones, and assigned land and hereditary slaves for its maintenance.

When in 1472 she yielded up the throne to Dhammazedi, she retired to Dagon, and during her last illness had her bed placed so that she could rest her dying eyes upon the gilded dome of the sacred fane. The Mon face of the Shwe Dagon inscription catalogues a list of repairs beginning in 1436 and finishing during Dhammazedi's reign. It mentions Queen Shinsawbu under a terrific Pali name of sixty-six letters. By the beginning of the 16th century the pagoda had become the most famous place of pilgrimage in Burma.

It is the most sacred Buddhist pagoda for the Burmese with relics of the past four Buddhas enshrined within, namely the staff of Kakusandha, the water filter of Koṇāgamana, a piece of the robe of Kassapa and eight hairs of Gautama, the historical Buddha.

A series of earthquakes caused damage to the Pagoda. The worst damage came from a 1768 earthquake that brought down the top of the stupa and it was raised to its current state by King Hsinbyushin (lit. Lord of the White Elephant) of Konbaung Dynasty. A new crown umbrella called hti was donated by King Mindon Min in 1871 after the annexation of Lower Burma by the British. 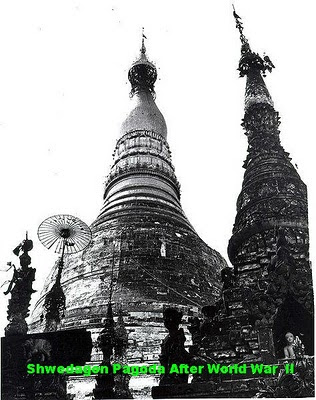 An earthquake of moderate intensity in October 1970 put the shaft of the hti visibly out of alignment. A scaffold was erected and extensive repairs to the hti were made.

The pagoda is listed on the Yangon City Heritage List.

There are four entrances to the Paya that lead up a flight of steps to the platform on Singuttara Hill. The eastern and southern approaches have vendors selling books, good luck charms, Buddha images, candles, gold leaf, incense sticks, prayer flags, streamers, miniature umbrellas and flowers. A pair of giant leogryphs called chinthe (mythical lions) guard the entrances and the image in the shrine at the top of the steps from the south is that of the second Buddha, Konagamana. 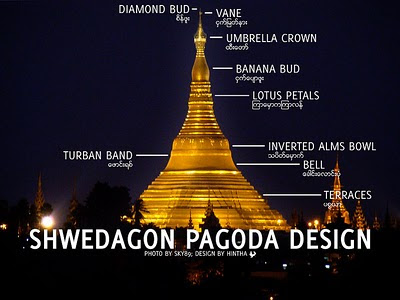 The base or plinth of the stupa is made of bricks covered with gold plates. Above the base are terraces that only monks and men can access. Next is the bell-shaped part of the stupa. Above that is the turban, then the inverted alms bowl, inverted and upright lotus petals , the banana bud and then the crown. The crown or umbrella is tipped with 5,448 diamonds and 2,317 rubies. Immediately before the diamond bud is a flag-shaped vane. The very top, the diamond bud is tipped with a 76 carat (15 g) diamond.

The gold seen on the stupa is made of genuine gold plates, covering the brick structure attached by traditional rivets. Myanmar people all over the country, as well as monarchs in its history, have donated gold to the pagoda to maintain it. It was started in the 15th century by the Mon Queen Shin Sawbu who gave her weight in gold and continues to this day.

In 1608 the Portuguese adventurer Philip de Brito e Nicote, known as Nga Zinka to the Burmese, plundered the Shwedagon Pagoda. His men took the 300-ton Great Bell of Dhammazedi, donated in 1485 by King Dhammazedi who succeeded Shin Sawbu. De Brito's intention was to melt the bell down to make cannons, but when he carried it across the Bago River it fell into the river. To this date, it has not been recovered. 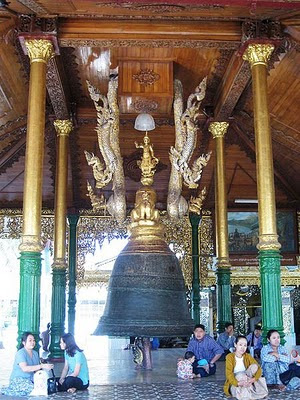 Two centuries later when the British landed on May 11, 1824 during the First Anglo-Burmese War, they immediately seized and occupied the Shwedagon Pagoda. They used it as a fortress until they left two years later. There was pillaging and vandalism, and one officer's excuse for digging a tunnel into the depths of the stupa was to find out if it could be used as a gunpowder magazine. The Maha Gandha (lit. great sweet sound) Bell, a 23-ton bronze bell cast in 1779 and donated by King Singu and popularly known as the Singu Min Bell, was carried off with the intention to ship it to Calcutta. It met the same fate as the Dhammazedi Bell and fell into the river. When the British failed in their attempts to recover it, the people offered to help provided it could be restored to the stupa. The British, thinking it would be in vain, agreed, upon which divers went in to tie hundreds of bamboo poles underneath the bell and floated it to the surface. There has been much confusion over this bell and the 42-ton Maha Tissada (three-toned) Gandha Bell donated in 1841 by King Tharrawaddy along with 20 kg of gold plating; this massive ornate bell hangs in its pavilion in the northeast corner of the stupa. A different but less plausible version of the account of the Singu Min Bell was given by Lt. J.E. Alexander in 1827 . This bell can be seen hung in another pavilion in the northwest of the pagoda platform.

The Second Anglo-Burmese War saw the British re-occupation of the Shwedagon in April 1852, only this time the stupa was to remain under their military control for 77 years until 1929, although the people were given access to the Paya.

Visitors must remove their shoes before the first step at any of the entrances. The southern and eastern approaches have traditional shops with wide gradual staircases. In addition these entrances have an elevator and the infrequently used western one is equipped with escalators. Burmese walk around the stupa clockwise (let ya yit).

The day of the week a person is born will determine their planetary post, eight in all as Wednesday is split in two, a.m. and p.m. They are marked by animals that represent the day, galon (garuda) for Sunday (ta nin ganway), tiger for Monday (ta nin la), lion for Tuesday (in ga), tusked elephant for Wednesday a.m.(bouddahu), tuskless elephant for Wednesday p.m. (yahu), mouse for Thursday (kyatha baday), guinea pig for Friday (thaukkya) and naga (mythical dragon/serpent) for Saturday (sanay). Each planetary post has a Buddha image and devotees offer flowers and prayer flags and pour water on the image with a prayer and a wish. At the base of the post behind the image is a guardian angel, and underneath the image can be seen the animal representing the day. The base of the stupa is octagonal and also surrounded by small shrines, eight in number for each day of the week. 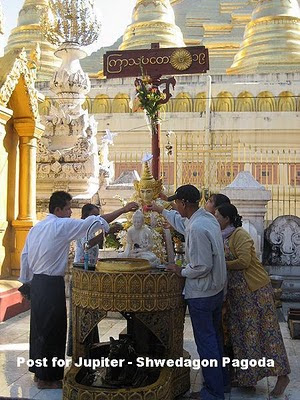 Most Myanmar people are Buddhist, at the same time believing astrology which originated from Hindu Brahmanism. It is very important for every Myanmar Buddhist people to recognize the day of their birth, such as Sunday, Monday, Tuesday etc. Otherwise, he or she may not know which part of pagoda platform to go and make special devotional acts either his or her desire or by the advice of Astrologer.

Myanmar astrology recognizes the seven planets, namely Sun, Mon, Mars, Jupiter, Mercury, Venus, and Saturn. In addition, it recognizes two other planets, Rahu and Ketu. All the Myanmar names of the planets are borrowed from Hindu astrology, but the Myanmar Rahu and Ketu are different from the Hindu Rahu and Ketu. The Myanmar considers them to be distinct and separate planets, whereas Hindu astrology considers them to be either the Dragon's Head and Tails, or Ascending and Descending Nodes. To the Myanmar people, Ketu is the king of all planets. As with other Nations the Myanmar name the seven days of their week after the seven planets, but Myanmar astrology recognizes an eight days week, Wednesday being divided into two days; until 6 p.m. it is Wednesday, but after 6.pm. to the midnight it is Rahu's day.

Most Myanmar Buddhist approach an astrologer for something or another, whether to go ahead with a move to a new house or get married or pass exams or doing new business. The astrologer would do some calculations according to the magic formulas he alone knows and arrive at a certain conclusion. The astrologer would sometime say that he or she is under the bad influence of a certain planet and to counter this the clients should go to his or her birthday planetary post and pour a certain number of cups of water or place papier mache umbrellas or flowers etc. as "yadaya" or to put it in English, a symbolic counter to avert the bad influences the subject is under currently or looming in the future by using the inherent powers in his or her offering plus some personal wishes.

The pilgrim, on his way up the steps of the pagoda, buys flowers, candles, coloured flags and streamers. They are to be offered in honour of the great stupa wherein are enshrined the relics of Buddha. This act is the act of dana, or giving, an important aspect of Buddhist teaching. The donation boxes around the pagoda receive offerings large and small, given to the pagoda for general purposes. All donations are voluntary, from the smallest coin put into the box to the priceless jewels hung on the top of the pagoda. No fees are ever requested at pagoda for use of the lifts or for the minding of footwear. The pilgrim can make whatever donation he chooses and may even make none if he wishes.

http://en.wikipedia.org/wiki/Shwedagon_Pagoda
Posted by Rajesh. CTR at 10:08:00 AM