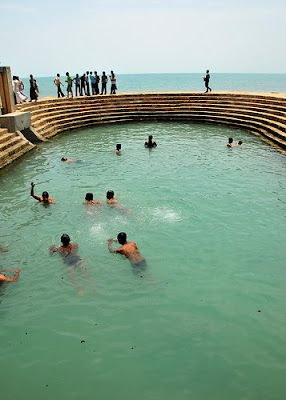 Keerimalai is a town in the Valikaamam North division of Jaffna District, Sri Lanka and situated West of Palaly. Naguleswaram temple is located in this suburb also a mineral water spring called Keerimalai Springs reputed for its curative properties. In Tamil Keerimalai means Mongoose-Hill.

The stories associate the place with a sage called Nakula Muni. He was called by that name because he had a face of a mongoose. Nagula in Sanskrit means a mongoose. He was relieved of his curse and acquired a human face after taking bath in the natural springs at this place. He made the place as his abode and hence it became Keerimalai. Keeri is the Tamil synonym for nagula, meaning a mongoose.

The Siva temple established by this sage at this place was named Nakulesvaram, which according to the chronicles of Jaffna, is one of earliest in Sri Lanka, existed prior to the arrival of Vijaya of the Pali chronicles.

The stories continue to say that later, a Chola princess was also relieved of her curse of having a horse-like face by taking bath in the springs.

These myths found place in written literature at a later time.

Nakulisa or Lakulisa was the first preceptor of the Pasupata school of Saivism, which was the earliest among the sects of Saivism.

The word pasupata should be pronounced as paa'supatha. Originating from Gujarat, the sect spread across the sub-continent and even beyond in historical times. The sect doesn’t exist today.

The priority given to Guru (preceptor and initiator) in the fundamentals of Saiva Siddhanta (Guru, Linga, Sangama) and the idea that a Guru is Siva himself originated from the Pasupata teachings.

The iconographic representations of Lukulisa which was synthesized with Buddha in his teaching position in some parts of South Asia, was synthesized into Siva in the form of a teacher (Thadchanaamoorthi) in South India.

Thirumoolar, an early saint of Tamil Saivism, is regarded as one who had come from the lineage of Pasupata preceptors.

In all probability, it was one such Pasupata preceptor or a group of Pasupatas who had come to Keerimalai and made an establishment there. The present temple, Nakuleasvaram, at Keerimalai is a recent structure. There is a strong possibility that the original temple was a samaadhi temple (a burial or memorial temple). The Pasupatas were largely known to officiate in such temples built for preceptors or rulers. 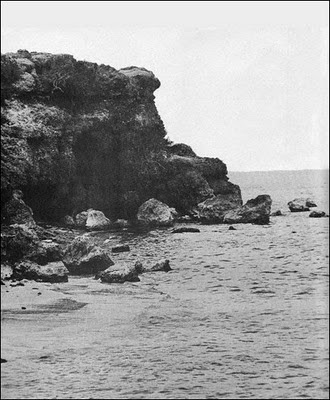 There is yet another possibility for the origins of the name Keerimalai. As a limestone cliff, it can also mean ‘the white hill’. Keeram is milk according to the lexicons, Thivaakaram, Pingkalam and Choodaama’ni. The cognate in Sinhala is Kiri.

The Pasupata establishment at Keerimalai might have succeeded by a Veerasaiva one, probably in the times of the Vijayanagara Empire. Such transitions smoothly took place elsewhere too, because both Pasupatam and Veerasaivam were non-Brahmanic traditions.

Today, Keerimalai is an important centre of the Veerasaivas, who probably had come from Karnataka. Until recent times, the old generation of them was retaining a code-language, with traces of Kannada vocabulary, to speak among them, without being understood by others.

“Keerimalai” is 50 feet above the main sea level. The fresh water comes from an underground fresh water spring. Keerimalai is a pilgrim centre and is considered a sacred place to perform rituals to ancestors.

“Nagulaambigai Sametha Sri naguleswara Perumaan” temple (commonly known as “Naguleswaram” temple) spreads to 50,000 square feet. “Naguleswaram” temple is one of the hallowed Sivan temples (Pancha Ishwaram) in Sri Lanka is situated here as well. Lord Siva is the destroyer or transformer. He is viewed as the supreme deity in Hinduism. There are five famous Ishwaram~ Sivan temples in Sri Lanka. They are Thirukoneswaram in trincomalee, Thiruketheeswaram in Mannar, Naguleswaram in Jaffna, Munneswaram in Chilaw and Kokkattichcholai Thaanthondreeswaram in Batticaloa.

Naguleswaram temple is endowed with special three attributes such as Moorthy (deity), Thalam (temple) and Theerththam (water). This temple has the Biggest Linga in Srilanka, The SahasraLinga (Linga with 1000lingas in it). 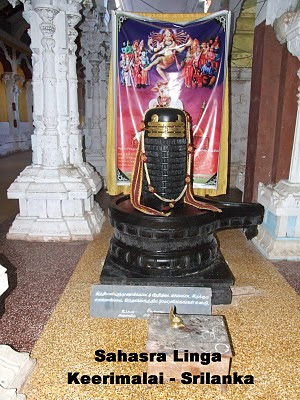 The old “Naguleswaram” temple was destroyed by the Portugese in 1621. A Brahmin priest, who fled the area during the Portugese regime, took the valuables from the temple, put and preserved them in a well according to Yaazhpaana Vaipava Maalai.

In 1878, Hindu reformer Sreelasri Aarumuga Naavalar campaigned to rebuild the temple. After 17 years, the consecration ceremony took place at “Naguleswaram”. But, due to an accidental fire in 1918, the temple was severely damaged. The current temple is being renovated, and nearly 70% of the construction work is completed so far.

The Keerimalai springs are not warm like those in Kanniya (near Trinconamalee), but they are as big as a swimming pool. It’s very nice, if you get there before the back-flipping kids.

Hindus flock in large numbers on “Aadi Amaavaasai” day which falls during the Tamil month of “Aadi”, to carry out rituals for their forefathers and take a divine dip in the natural springs. These rituals are usually carried out by men. “Keerimalai” is famous for “Aadi Amaavaasai” and continues to be the foremost place.