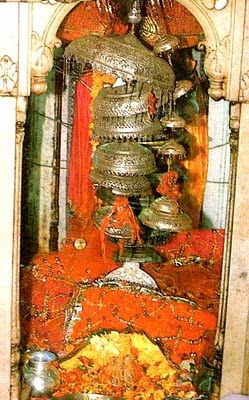 Chintpurni is situated at the altitude of 940 metres and is part, Una district, Himachal Pradesh. The temple is situated on one of the highest peaks of the Sola Singhi range of hills. It is about 3 km west of Bharwain which is located on the Hoshiarpur - Dharmashala road. This road is part of the State Highway network and is normally kept in good shape throughout the year.

Private vehicles are usually not allowed beyond the Chintpurni bus stand which is about 1.5 km from the Temple. You would have to walk this distance.

1. Chhin-Mastika : It is said that a devotee named Mayidass, who was an ardent devotee of Goddess Durga, disco- vered this spot. As per the old myth, Mayidas was born in village Athar (District Patiala of Punjab). His father had three sons and Mayidass happened to be the youngest one. Like his father, Mayidas used to spend much of his time in the worship of mother goddess. Due to this he was not able to help in the family business. Owing to this aversion to business, his brothers separated from him.

One day, while going to his inlaws house, he sat to rest, under a banyan tree, Mayidass fell asleep. While sleeping he dreamt a divine giri full of radiance and blazing. The divine girl ordered Mayidass to built a temple at the same spot and she said she is staying under the tree in "Pindi- Rupa.' and known as Chhin-Mastika.

2. Chhinnamastika Name: Why and How?

As per Markandeya Purana it is believed that after the victory of Mother 'CHANDI' over all demons, the two disciple companions Ajay and Vijay begged of mother, to quench their blood thirst. On hearing this goddess 'Chandi' cut her own head and quenched the thirst of her disciple companions. That is how goddess was named as Chhinnamastika.

Devotees have been visiting this Shaktipeeth for centuries to pray at the lotus feet of Mata Shri Chhinnamastika Devi. Some parts of the holy feet of Sati are said to have fallen here, while Lord Vishnu shot arrows to cut the corpse into pieces.

The Chintpurni Temple besides having the idols of Mata Shri Chhinnamastika Devi and Mata Shri Chintpurni Devi also has the idol of Chhina Mastaka, the killer of the demon Nishumbha. This temple is revered by the Hindus in Punjab, Haryana and Himachal Pradesh and it is believed that the Goddess Chintpurni is the remover of all troubles. They bring with them their worldly concerns and seek blessings from the Devi.

It is believed that if you ask something from the Devi with a true heart, your wish will be granted.

Apart from the holy shrine, according to Manav Bhardwaj, the place is full of picturesque surroundings. Some very nice places for sight seeing, indoor and out door activities are situated in and around Chintpurni.

The Navaratra fairs in Shravan (August), Kartik (October) and Chaitra (March-April) are very popular with devotees when accommodation is very tight. Other popular days are Sankranti, Purnima and Ashtami.