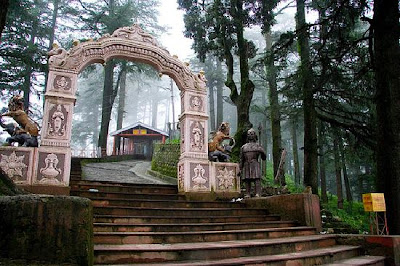 This temple of lord Hanumanji is situated at the height of about 8500 ft. in the east of historical ridge ground in Shimla city. This temple is very easily approachable and is one of the most sought after site to be visited not only by the devotees and pilgrims but also by the tourists of all age groups visiting Shimla, the Hill capital of Himachal Pradesh.

According to mythology, during the battle between lord Rama and Ravana at Lanka, Lakshmana the younger brother of lord Rama was injured from an arrow from Meghnad and turned senseless. In order to save his life, when lord Hanuman was moving towards Himalaya to get sanjeewani herb, all of a sudden he saw Yaaku sage on Jakhu mountain in penance. This place was named Jakhu, after the same sage. In order to gather more details about sanjeewani, lord Hanuman landed here. As a result of which Jakhu mountain which earlier was much higher, half sunk into earth.

After getting all the clarifications about the herb, lord Hanuman started his journey towards mount Dron. However, his friends accompanying him felt asleep here due to long distant tiring journey. When they woke up, all of them were sad on not finding lord Hanuman with them. All of them decided to stay here. Their successors can be seen roaming in this area even today.

Situated in the thick forests of Jakhu hills, there are hundreds of monkeys in and around the temple, who have made this temple and the area around it their habitat. You can easily offer them eatable with care, from a distance, without any danger of their harming you.

Visitors must remove shoes (and leave them in the "shoe house") before entering the temple. There are several eateries at the temple site. Local visitors ring the bell for good luck before making the descent back into Shimla.

Thanks.Jakhu Temple tour is amazing. It is very peaceful and wonderful place.

Nice post.Thank you for sharing some good things!! Hill Stations