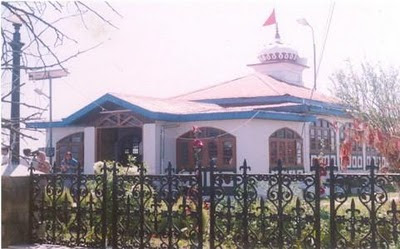 The history of this temple dates back to about 250 years when this temple was built here. There is a belief that the goddess Tara was brought to Himachal Pradesh all the way from the eastern state of Bengal . Hundreds of years ago a king from the Sen Dynasty visited this area. This king had brought his family deity in the form of a small gold Idol encased in a locket which he always wore around his upper arm.

For many years the idol remained encased but in the 96th generation of sen dynasty, Raja Bhupendra Sen one day had an unusual experience while hunting in the dense forest of Juggar , near by the present temple, where he had a vision of his holy family deity goddess :"Ma Tara" along with her Dwarpal Bhairav and Hanuman Ji, who expressed her keen desire to be unveiled before the people. The Raja immediately donated 50 bighas of land on the name of Ma Tara and got constructed a temple there, in which a wooden idol of the Goddess was installed in accordance with Vaishnav traditions.

Later on Raja Balbir Sen of the same dynasty had a dream in which the Goddess expressed her desire to be installed on the hill top of Tarav Parvat. The Raja on the advise of one of his pandits named Bhawani Dutt got a beautiful Idol prepared out of ‘Ashtadhatu’ from one Gusanwu artisan at his capital Junga and carried it over an Elephant named ‘Shankar’ and had it installed in the Vikrami era, 1825 on the Hill Top of Tarav Parvat, where it stands in all majesty and grandeur even today. The Sen dynasty of the erstwhile Keonthal State till date is carrying on with the age old tradition of worshipping their family deity Ma Tara on Ashtami during Shardiya Navratras.

This temple is dedicated to goddess Tara.The temple besides normal visiting days is thronged by devotees from all parts of the country in large number during the Navratras. The road meandering uphill through the sweet smelling pine forests and lush green meadows with the cool gentle breeze touching one softly infusing a freshness and vigor in the devotees, pilgrims and tourists visiting this holy shrine.

The location of the temple on the Hill top makes it appear that the goddess Ma Tara Devi seems to keep everyone under the protective gaze, showering innumerable blessings on her worshippers.

Each year a fair is also held during Ashtami of Shardiya Navratras in the temple complex. The wrestling is an age old tradition of this fair every year.