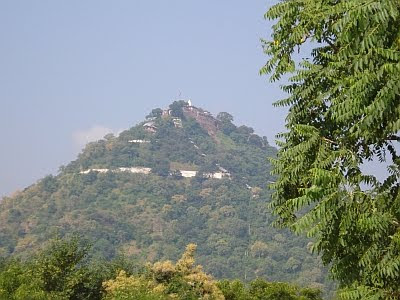 Location : Maihar city lies in Satna District of State of Madhya Pradesh. Sharda Devi (goddess) is situated in Trikuta hill around 5 km from the heart of the town. Maihar is about: 42 km. away from Satna, 65 km. away from Katni,

Maihar is a holy town of Madhya Pradesh State. Devotees from all over India visits ‘Maa Sharda Temple’ throughout the year. Temple is located in top of the mountain and can be reached through 1060 steps, road. It is quite obvious that visit is not easy task specially for aged or physically unfit devotees. Considering the problem of devotees, management had started the service of ropeway service for devotees to reach Mother goddess Sharda Temple conveniently and in short time. Many peoples visit the temple in Navratri or Ram Navmi. 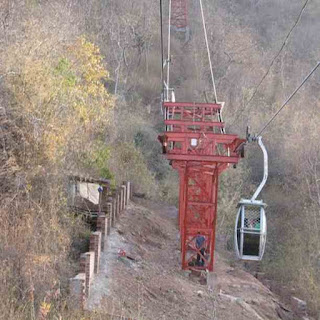 There is one ancient inscription near the feet of stone sculpture of Sharda Devi situated in Sharda Devi temple. There is another statue of Lord Narsingh along with Sharda Devi. These statues were installed by Nupula Deva on Shake 424 chaitra krishna paksha 14 Tuesday, vikram samvat 559 i.e. 502 AD. This stone inscription Sharda Devi in four lines is of size 15" by 3.5" in Devanagari script. Another stone inscription at the temple is of size 34" by 31" inscribed by a shaiva saint Shamba who had knowledge of Buddhism and Jainism also. This inscription bears a scene of Nagadeva and reveals that it was about Damodara, son of Saraswati, was considered the Vyasa of Kaliyuga. And that there prevailed system of goat sacrifice at that time during worship.

1. It is a common belief that first fall Adiguru Shankracharya offered his prayer and worship in this temple.

2. Traditional sacred stories says that when Lord Shiva was in state of deep sorrow and anguish, due to the death of Sati (Wife of Lord Shiva) and was roaming in earth with her dead body on his back. Lord Vishnu, came forward to save mankind and cuts the body of Sati in to 52 pieces. In Maihar necklace of Sati fell down and hence temple was established here. Its name “Maihar” can be broken to two parts “Mai” means mother and “har” means necklace.

3. Local tradition reveals that the warriors Alha and Udal, who had war with Prithvi Raj Chauhan, are associated with this place. Both the brothers were very strong followers of Sharda Devi. It is said that Alha penanced for 12 years and got the amaratva with the blessings of Sharda Devi. Alha and Udal are said to be the first to visit the goddess in this remote forest. Alha used to call the mother goddess by the name 'Sharda Mai' and henceforth she became popular as 'Mata Sharda Mai'. One can see down hill behind the temple, the pond known as 'Alha Pond'. At a distance of 2 km from this pond is situated the akhara of Alha and Udal where they did practice of kusti.

Tempal mandir is buetiful. I am anoop kumar gupta.

What are the temple and Ropeway timings and how much time does it generally take to complete the journey and darshan?

What are the temple and rope way timings.
Additionally, how much time does it take to complete the journey and the darshan?

one will feel peace of mind here...
Nice view around....