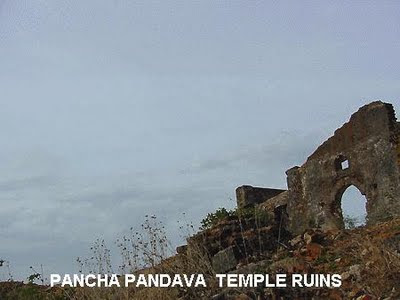 Lord Brahma at Pallavaram :
This is an left over ruins of ancient rock-cut temple where Lord Brahma and his Trimurti associates were worshipped. The Panchapandava Cave Temple was built in the early 7th century by Mahendravarman I, king of the Pallava dynasty. The holy site was eventually taken over by Muslims, and has now fallen to ruin.

The Panchapandava Cave Temple is located in Pallavaram (Pallavapuram). Today it is a suburban town within the city limits of Chennai, in Kanchipuram district. The temple site is ancient, as evidenced by artifacts found there from the Old Stone and Iron Age.

Valmiki, author of the Ramayana, is said to have lived in this area. The Pallavaram Temple has long been known as 'Panchapandava' Temple because of its association with the five Pandava brothers, although there is no extant evidence of that connection.

The site is one of a series of amazing rock-cut temples constructed by King Mahendravarman throughout his kingdom, others of which are found at Dalavanur, Tiruchirapalli, Mandagapattu, Kilmavilangai, Mamandur and Tiru-kazhukunram.

Architecture :
The Panchapandava Temple was constructed in typical Pallava style, with six huge pillars in front. Cut into the mother rock was a sanctum sanctorum featuring five cells, one for each member of the Trimurti, the presiding deities. The two cells on the outer sides were for subsidiary deities, whose identity is unknown. All five shrines face south. The sanctum as a whole projects outward, carved from a protruding section of the main rock. In the picture below, we see that at one point, a roof covered the sanctum and a narrow porch area. As was typically the case with Mahendra rock-cut temples, the number of shrines correspond to the number of pillars, so that each niche would be approached by stepping between a pair of pillars.

To the Vaisnavas and Saivites, the hill at Panchapandava Cave Temple is known as Panchapandava Malai. To the Muslims who have taken it over, it is known as Maula Ka Pahad. Muslims believe that Pallavaram Hill is home to a relic of Prophet Mohammad. In the evening during Ramadan (called Ramzan in India), Muslim pilgrims walk to the top of the hill where the cave temple ruins are found. 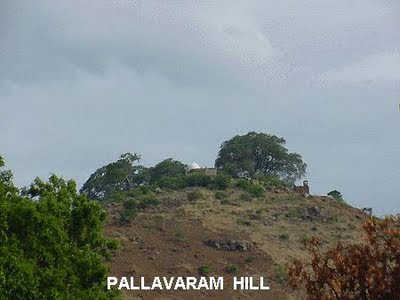 In fact, it was originally the Sufi Muslims who invaded this area, taking over the Panchapandava caves and turning them into a masjid for worshipping the panjã (palm). While now being used as a Muslim dargah, the temple ruins have unfortunately been painted and renovated beyond recognition.