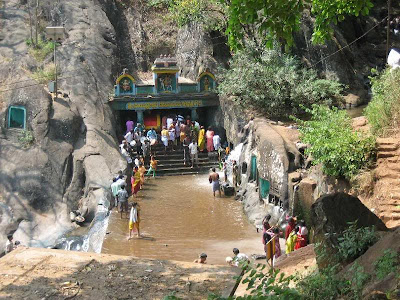 This is an ancient cave temple situated in the lovely picnic spot of Kalhatti falls. This temple is near Kalhattipura which is 20 km south of Tarikere in Chikmagalur District and about 10 km from Kemmannagundi. Tarikere Junction Railway Station is the nearest railhead.

This temple i am not sure if it is Hill temple, but it is constructed in a gap between rocks, this temple is said to have been built during the Vijaynagara period. The main deity is Lord Veerabhadreshwara, an incarnation of Lord Shiva. The entrance of the temple is decorated with three stone carvings of three elephants. According to legends, this place has once hosted the hermitages of Sage Agastya.

The temple conducts its festival for three days every year. No animal sacrifice is made at this temple, but animal sacrifice occurs at the goddess temple a few yards before the Shiva temple.

Goddess Chowdeshwari Temple and the Kalhatti falls, situated amidst the natural surroundings, attract both tourists and pilgrims.