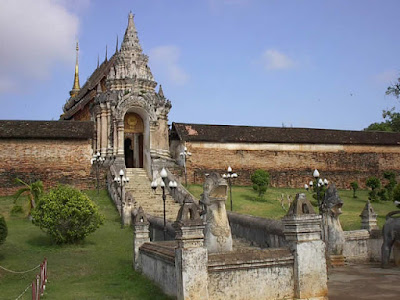 The fame of the site, and its preservation throughout the centuries, is largely due to the belief that the historical Buddha visited here about 2,500 years ago and donated a lock of his hair, which is now enshrined in the pagoda.

Wat Phra That Lampang Luang is a remarkable example of an ancient temple that has the distinction of being one of the few unique temples where maintenance work has not been undertaken yet being well preserved. It maintains its originality with sand covered grounds and bricks exposing walls.

There are several bullet holes on the railing of the temple, reputed to be fired by legendary folk hero Nan Thipchang, and ancestors of the House of Chao Chet Ton (Seven Princes) which ruled Lanna as a Siamese Vassal during the Thonburi and Early-Mid Rattanokosin eras.


When approaching the site, the first impression it gives is the tall, imposing walls that surround the site. The temple is built on a tiny hilltop in the midst of rice field. It’s believed to have been constructed around 700 AD with Burmese connection as seen in the flights of steps going up adorned by multi-headed Naga.


The star attraction of the temple is the 45 meter high pagoda which is adorned by many differently shaped and crafted gold plates, that sets it uniquely apart from most of the pagodas that are gilded with gold paint. There are two shrines on the sides and a gorgeous prayer hall in front. However, there’s something magical about this temple that no one could explain—There’s a room located at the back diagonal direction of the Pagoda with a hole on the door. When the sun light shines through the pagoda, you will see an upside down image of the entire temple reflected on the wall through the hole, just like a naturally occurring pinhole camera image. Yet, there’s NO lense being installed in the hole!

http://www.12fly.com.my/thailand/the-amazing-northern-thailand-lampang/
Posted by Rajesh. CTR at 8:04:00 AM