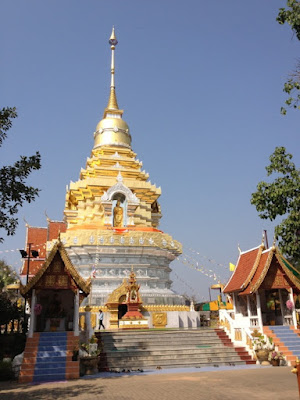 Location
Wat Phrathat Doi Saket is located in the Doi Saket district, just outside the city of Chiang Mai. Travelling to the temple by motorbike or car will take approximately 30 minutes from the center of Chiang Mai. Doi Saket is located on the road north to Chiang Rai (Highway 118), just before the climb up the mountain on the right hand side. The Doi Saket district is predominantly a rural farming area, with plenty of rice fields in the valley as well as orchards and other farming on the mountainsides. Travelinasia have attached a map to this article showing how to get there from Chiang Mai.


History
The temple at Doi Saket is said to have been built in the year 1112. The legend is that the Lord Buddha had come to Doi Saket for a short time, and was visited by naka whom he offered his hair for the purpose of worship. Shortly after he is said to have dissapeared, and this is the reason for the location of the temple. Thai artist, "Khun Chaiwat Wannanon" began painting the interior of the temple walls with spiritual Buddhist murals in the early 1990s. It took over 4 years for the murals to be completed. This is something that is unique to the temple at Doi Saket. Normally modern art is not featured in Buddhist temples in Thailand, so this is somewhat unique to Doi Saket.

Modern Buddhist Paintings at Wat Phrathat Doi Saket :
There are lot of beautiful modern paintings in this temple. Ryan Zander who resides in Chian mai describes the paintings in detail in his blog post http://siamandbeyond.com/modern-buddhist-paintings-wat-phrathat-doi-saket/ 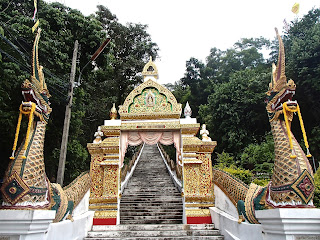 The temple at Doi Saket is similar to the Doi Suthep Temple, yet smaller in size. The temple’s chedi, or stupa, glistens in the sunlight with both gold and silver. It is actually composed of a building that you can enter with the dome mounted on top. Inside, you’ll find a passageway to circumambulate the sacred relics kept here.  The entrance to the temple (as is the case at Doi Suthep) has a steep set of stairs leading to the temple. The most prominent feature of the Doi Saket Temple is the giant golden sitting Buddha (Phra Buddha Pathimakorn), visible from the road leading to the temple. The interior walls of the temple are decorated with modern spiritual murals, painted by Khun Chaiwat Wannanon. There is also a monastic school located on the grounds of the temple. There is a Chinese-style pavilion containing a shrine to Guan-Yin, the Bodhisattva of Compassion. As the East Asian version of Avalokiteshvara, Guan-Yin is technically part of the Mahayana pantheon and doesn’t play any official role in traditional Theravada Buddhist practice. Yet, the influence of China upon Southeast Asia is so strong that you’ll find Guan-Yin at many Thai temples, where she’s worshiped just as much for good luck as she is for striving to accumulate virtue. The Chedi features the relics of Buddha and a Golden Umbrella. 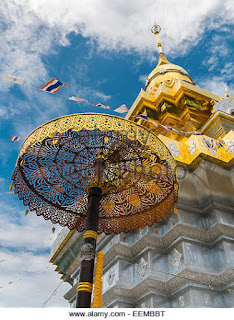 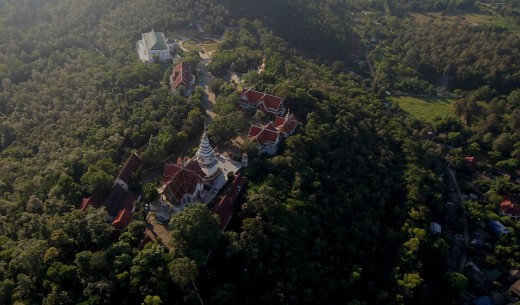 Etiquette
When you visit any temple, or government office in Thailand, you are expected to dress appropriately. Proper dress includes wearing long pants or trousers, with a sleeved shirt as apposed to shorts and sleeveless shirts. Women should dress conservative, without displaying skin, short skirts and tank tops are frowned upon. You will also be asked to take off your shoes before entering the temple, you will see hundreds of peoples shoes in a pile at the entrance. Once inside the temple, you should make sure not to offend anyone, keep your voice down and try to not to cause any disruption to other people. There’s a cute little coffee shop near the parking area if you need a refreshment.

Photography
All the photos and video of the temple that you see in this article are taken by "Heli-Asia", using their remote controlled helicopter with remote camera mount. The helicopter traveled to over 100 meters above the highest point of the temple and hovered there using a sophisticated flight control system that allows the helicopter to remain at the same altitude for a long period of time. The camera mount is controlled remotely from the ground, and there is a live video feed showing the viewer of the camera. It takes 2 experienced technicians to operate the helicopter and the camera. Using a series of still photos taken at various different angles, Heli-Asia also created a spherical image of the temple, the temple grounds and the Doi Saket district.