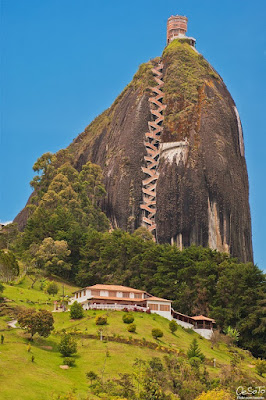 La Piedra Del Peñol (Spanish for "The Rock of Guatapé"), also known as El Peñol Stone or simply La Piedra (Spanish for "The Stone"), is a monolithic formation located at the town and municipality of Guatapé, 1 km inside the city limits (86 km northeast of Medellín or 2 hours by bus) in Antioquia, Colombia.

The wide Antioquian rock base, called "batlolito antioqueño", and the "Peñón" were formed millions of years ago.

The Tahamies Indians, former inhabitants of this region, worshiped the rock and called it in their language "mojarrá" or "mujará" (rock or stone).

This rock is located in the rural area called "La Piedra", just 5 minutes from the town of Guatapé, and can be reached by road.

On the northern face of the stone there are painted large white letters, "G", and an incomplete "U" (only the single vertical stroke was completed). Guatapé and El Peñol had long disputed ownership of the rock, and the residents of Guatapé decided to settle the matter by painting the town's name on the rock in huge white letters. It did not take long for the residents of El Peñol to notice the work, and a large mob was assembled to stop it. Only the "G" and part of the "U" were completed. 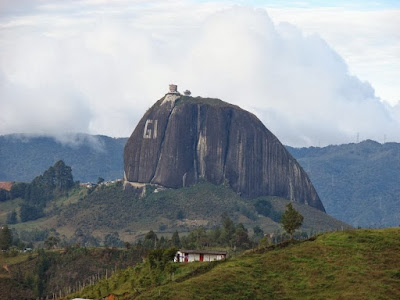 The rock was first climbed officially on July 1954. In 2006, Luis Villegas, Pedro Nel Ramírez and Ramón Díaz climbed the rock in a five-day endeavor, using sticks that were fixed against the rock's wall. (It is unknown whether the Tahamies had a way of ascending the stone.). Climbing the huge stone took five days, but the top of the rock revealed beautiful views and a new species of plant, Pitcairma heterophila. The rock soon became a modest tourist attraction.

A new species of plant was found on the top of the rock, subsequently named Pitcairma heterophila by a German scientist.

A viewing spot was built on top of the rock, where it is possible to acquire handicrafts, postcards, and other local goods. It is possible to see the 500 km shore-perimeter dam. There are 740 steps to the uppermost step atop the building at the summit, a fact reinforced by yellow numbers also seen in the climb up the stairs. 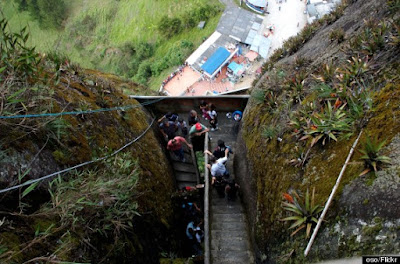 In the 1940s, the Colombian government declared it a "National Monument"

The Stone of Peñol is composed of quartz, feldspar and mica. The rock, which is almost entirely smooth, has one long crack, the one that the climbers used in ascending it. In the crack was later wedged a 649-step masonry staircase, that appears like a giant stitch holding the split rock together, the only way to get to the top of the Piedra de Penol. In the 1970s, the area was dammed, and the view from the rock changed: It now overlooks a dramatic series of lakes and islands.

Today, you can ascend the rock (apparently owned by a local family, though also designated by Colombia as a "national monument") for 2 US dollars. There you'll find a few religious relics and a three-story lookout tower.