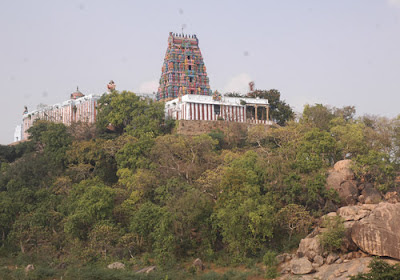 1) Legend tells us that Saint Arunagirinathar was directed in a dream to go to Viralimalai, which in those days was situated amidst thick jungle. Not far from Viralimalai Arunagiri lost his way in the jungle. From out of nowhere there appeared a Veddar or hunting tribesman who guided Arunagiri to large rock from where he could see Viralimalai hill. The Veddar vanished and only then did Arunagiri realize that his mysterious guide was none other than Lord Murugan Himself. Today the spot is marked by an ashram where bhaktars meditate on Lord Murugan's mercy.

2) Sages and saints were in the form of Kura trees and worshipped the Lord of Viralimalai. Hence this place was called Viravi Malai which later became Viralimalai. The poet Saint Arunagirinathar has mentioned in his songs about saints staying and worshipping Lord Muruga in this hill temple.

3) Saint Vashishtar's wife Arundhati forgets to feed Lord Murugan when he was born at Saravana Poigai. Due to this her husband cursed her. In turn Vashishtar was cursed by Lord Murugan for the ill fate he brought on his wife. As per mythology both Vashishtar and his wife Arundhati prayed here in Viralimalai to ward off their curse. Saints like Kashyapa Munivar and Naradar are believed to have offered their prayer here in Viralimalai to ward off curses.

4) The representative of the Palayamkarar Karupamuthu Pillai used to visit the temple every Friday. During one such visit, due to heavy rains there was flood and tanks bunds were broken. The river Mamundi was also flooded and Karupamuthu Pillai was cut off from the mainland. He neither had food to eat nor cigars to smoke and was in great misery as he was a chain smoker. Lord Murugan appeared before him, gave him cigar and matchstick and also took him to the temple for darshan. From that day cigar is offered to Lord Murugan along with neiveidyam and given away as prasadam to devotees.

The hill is small and rocky. From the foot of the hill a beautiful flight of steps take us to the top. These footsteps are engraved on the rock and are 207 in number. In between there are beautiful mandapams for devotees to rest.

We find the statue of Kashyapa Muni and Narada Muni in the hill temple along with sculptures of Arundhati and Vashishta. We also find the sculpture of Arumugan and Arunagirinathar on the pillars found on the way to the temple. The temple is located on top of the hill and can be seen from a great distance. A beautiful flight of steps along with mandapams for devotees to rest, take us to the top of the hill. At the foot of the hills the water tank called Saravana Poigai is located on southern side. On the eastern side there is a Srine for the goddess Maikannudaiyal. It is customary to worship this goddess before climbing up the hill.

On the way to the hill top we find the Idumban Sannidhi a small cave Srine for Meenakshi Sundareshwar and a mandapam called Sandana Kottam at the end of the flight of steps. Adjacent to the Sandana Kottam Mandapam we find the Navaratri and Shanmuga Moorty Mandapam.

Next to the Navaratri Mandapam we find the south-facing Raja Gopuram. In the Shanmuga Moorthy Mandapam of this temple with a single prahara the utsavamoorthy gives darshan together with devas. In the western part of the prahara we find the Srines of Vinayagar, Dakshina Moorthy, Agasthiyar and Arunagirinathar and in the northern side we find the Srine of Chandikeshwarar and Bhairavar.

On the southern part of the foothill Saravana Poigai, the Sthala Theertham is located. It is also called Naga Theertham. A Naaga is fixed (Prathistai) at centre of the theertham. The Sthala Vriksham in this temple is Kasi Vilvam.

The vision of the Lord inside the Garbhagraha is soul-stirring. The Lord is in the form of Arumugan, six-faced and with twelve hands seated elegantly on the peacock facing east. The divine consorts Valli and Deivannai stand on either side. As the Sivachariyar offers camphor the devotees can see the three faces at the back in the mirror which the other three can be viewed directly.

Method of Worship
The daily puja is performed six times a day and as per Kamika Agamam.

Inscriptions
On the outside wall of the sanctum sanctorum, we find a few inscriptions. These contain certain information on the history of the temple.

http://en.wikipedia.org/wiki/Viralimalai
Posted by Rajesh. CTR at 8:09:00 AM