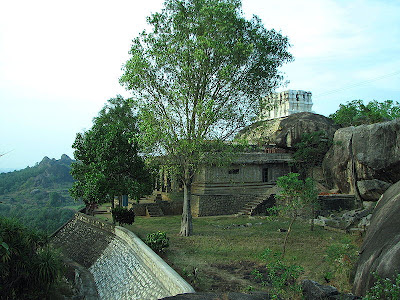 Chitharal (also spelt Chidaral) is 55km from Kanyakumari, 36km from Nagercoil and 7km from Marthandam. The approach road is from Kandapuram, leading to Elanthavilas. Chitharal is located exactly 4km North East of Kuzhithurai. Cars and Vans can go upto the foot of the hill. One has to walk for about 10 minutes to reach the temple.

The Jain influence in this region was due to the Jain Tamil King Mahendra Verman-I (610-640). These temples of Jain Deities'were considered to be built in 9th century AD.

Around the period of the decline of Jainism during the rule of the Cholas in the 11th Century, it is believed that Chandragupta Maurya, along with a Jain ascetic Badrabhahu, reached Sravanabelagola in 298 BC. Their disciples travelled to this region to spread Jainism and chose the hillock for meditation.

It was, however, converted into a Hindu temple in 1250A.D., and an image of Bhagavathy was installed and named, Thirucharanmalai, means `the hill holy to the charanas'.  But still the rockcut sculptures and statues of 23 Jain theerthangars including Mahaveerar are left undamaged and still maintained without any damages. It was once called Chokkanthoongi Hills and now as Malaikoil by locals. 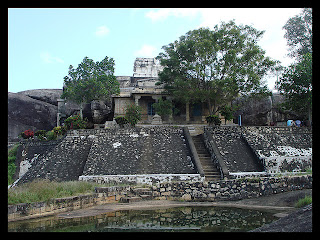 Chitharal is historically known as Thirucharanathupalli – the abode of Jain monks belonging to Digambara sect. Hillock at Chitharal has a cave containing Rock-cut sculptures of Thirthankaras and attendent deities carved inside and outside. The sculptures are the main attraction in Chitharal. Also these sculptures are historically known as Thirucharanathupalli, and are situated inside the caves on a very long Hill.

At the foot of the Thirucharanmalai hillock, one can see a stylish Kerala Style Arch made of rocks and is the
starting point of your Trek. The atmosphere and the indications at the foot will not give you any indication of a  hard Climb ahead. So be prepared for a hard steep climb of a 800 meters.

It will be better, if you select a day with sun is not too sharp. All over the trekking time one can see several cement benches to sit, but the hottest sun will not allow you to sit on them. Colorful flowers and some trees with red and yellow flowers around these benches complets the picturesque.

From the top, one can see or enjoy the beauty of winding rivers, lakes, fields, clusters of villages, coconut fields, tall church spires, and the lines of Western Ghat covered with white clouds; and is a mind blowing scenery, which you won't get from anywhere.

Another main attraction at the top hill is two large rocks facing each other, and one can explore whole beauty of the foot through the small window created by these rocks. Also at the top hill, one can see some ruined or parts of ancient temples, which is believed to be of Charanas.

The whole rocky area is carved with Jain deities' images and is also a part of ancient era. 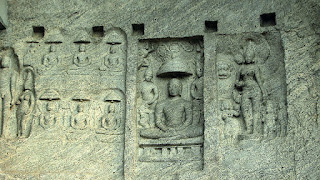 There are 9 stone inscriptions in Tamil vattezheutthu, sanskrit and Malayalam dating back to 9th Century A.D. One of the stone inscriptions says that there was a Jain University at this place during 1st century BC. and Queen Kuratimarayar had donated wealth to the university. This inscription is found in Tamil Brahmi scriptures.

Festivals :
The Jain images have been preserved by Central Archeological Survey of India and they are making yearly  3day celebrations from 2009.


http://ta.wikipedia.org/wiki/சிதறால்_மலைக்_கோவில்
Posted by Rajesh. CTR at 6:59:00 AM

bhutan rundreise - If you are going to make a plan to visit Bhutan, BiCi Adventure is the best company and arranges better tour.