Sri Nrusinghanath Temple is situated in the slope of Gandhamardhan hills in the district of Baragarh, Orissa. Situated about 300 kilometers from the famous temple of Lord Jagannath in Puri, the Nrusinghnath temple is on top of the famous GandhamadanHill. It is about 110 km west of Baragarh and 64 km from Sambalpur. Khariar Road Railway Station is the nearest railhead. 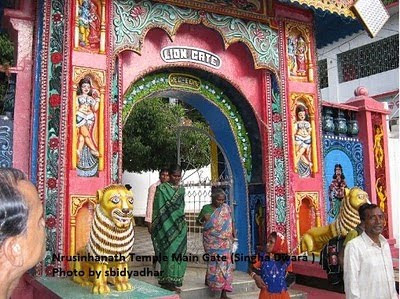 The local tradition about this deity was compiled in the middle of the 18th century by the poet Yuga Das Kondh in his Nrsimha-charita. It is said that in Treta-yuga there was a rishi named Uttanka who was performing austerities on the bank of the Godavari River. He had an attractive young daughter named Malati. Oneday, Ravan came by that place and saw the beauty of the young girl. Ravan raped her and threw her into the Godavari River. The Godavari took compassion on her and brought her to the shore. When Malati came to her senses, she began searching for her father and crying. Indura, the mouse carrier of Ganesh, heard her cries and offered to help her reach her parents if she would agree to enjoy with him.

From Indura, a demon was born named Mushika Daitya (literally, “mouse demon”). The new-born baby was so ferocious that as soon as he came from the womb he immediately devoured his mother. Then he began to perform austerities to please Lord Shiva. Shiva was pleased with him and gave him the boon that he would have no cause of fear from anyone except for Lord Nrisinghadev from Satya-yuga.

Seeing his power, the devas became frightened and appealed to Lord Ramachandra to rescue the universe. Accordingly, Lord Ramachandra manifested the form of Nrisinghadev to catch the demon. Mushika Daitya became fearful and ran from place to place seeking shelter, until finally he appealed to Gandhamadan Hill. The personified Gandhamadan granted shelter to Mushika Daitya, who then entered within a crack in the hill. When Lord Ramachandra later arrived, Gandhamadan requested him not to enter inside of the hill to seek out the demon. Lord Ramachandra then assumed the form of marjara-kesari, with the head of a cat and the body of a lion, and began guarding the area by the sudanga, or inner door of Gandhamardan. Just as a cat sits quietly by a hole, waiting for a mouse, similarly, Lord Marjara Kesari is said to still be sitting and waiting for the demon Mushika to come out.

2) Some literatures say that Gandhamadan Hill was originally in the Himalayas, but a part of it fell down in this place when Hanuman was carrying it to Lanka with the herbs required to heal Lakshman.

3) Gandhamadan Hill is also said to be one of the places where the Pandavas visited during their exile.

According to Huen Tsang, the Chinese traveler, this place was a centre of Buddhist scriptural learning. According to Oriya and Devnagari inscriptions, the temple was built by Baijal Dev in early 15th century AD. The temple is constructed in Orissan style of architecture.

This temple is situated at the foot of the Gandhamardana Mountain, which in ancient times was called parimalagiri.

The Vidala-Nrusimha Temple stands amidst the verdant beauty of the picturesque Gandhamardan hills. Nrusinghanath is a popular and attractive pilgrim point. 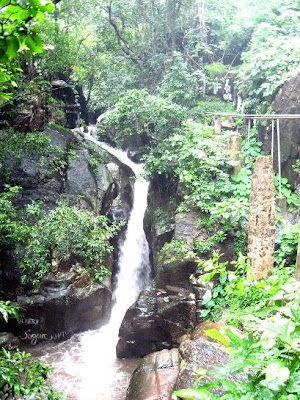 Coupled with a series of beautiful waterfalls and some sculptures, its location offers an air of serenity and visual delight, making the trip worthwhile. Harishankar Temple, another pilgrimage place is situated on the southern slopes of Gandhamardhan hills just 10-15kms. from Nrushinganath temple. But there is no direct road connecting these two temples. The plateau between the two temples is found with ancient Buddhist ruins. Which are considered to be remnants of the ancient Parimalgiri University. 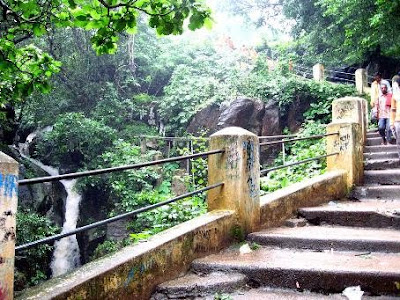 Lord Nrushinghanath is a much-adored deity of Orissa ahttp://www.blogger.com/img/blank.gifnd a great fair is held in his honour on Nrusimha-chatrurdasi day during Vaishakha shukla chaturdashi(in May) on the 14th day of bright fortnight in the month of Vaisakha.

The fair held on Nrusimha-chatrurdasi day attracts thousanhttp://www.blogger.com/img/blank.gifds of pilgrims from far and near.