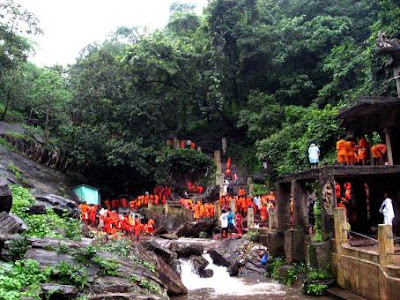 Location :
http://www.blogger.com/img/blank.gif
Sri Sri Harishankar Devasthana in the slope of the beautiful Gandhamardhan hills , Orissa. It is located in the district of Balangir, Orissa about 45 km from Bhubaneswar city.

Harishankar Temple is popular for its scenic of nature and presence of two Hindu lords, Vishnu and Shiva. As a holy place along with a beautiful stream passing on the granite bed give the visitor feeling of natures peace.

The deity of Harishankar was discovered by a Chauhan dynasty king of Western Orissa during the 14th century. From then the deity has been worshipped. A dancing Ganesha image is found which can be traced to the early 12th century. The temple was constructed by the order of then queen Durlabha Devi of Maharaja Vaijjal Dev Chauhan.

On its opposite of side of the Gandhamardhan hills is the temple of Nrusinghanath. The plateau between the two temples is found with ancient Buddhist ruins. Which are considered to be remnants of the ancient Parimalgiri University.http://www.blogger.com/img/blank.gif

India is a religious land. Ever since the dawn of civilization, India has been the birthplace of many religions. Being so, the country boasts of a lot of pilgrim destinations within its precincts. Rich in mythology, it has a number of temples, mosques, monasteries, churches and gurdwaras, which attract lakhs of devotees every year. Pilgrimage tour India

Bolangir is some 445 kms from Bhubaneswar (state capital).