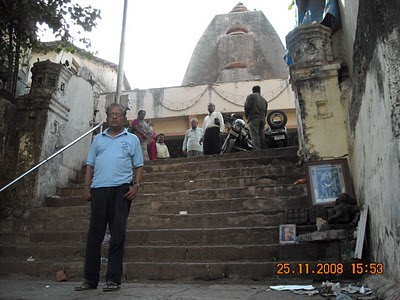 Legend has it that Hindu god, Ram paused at that spot on his way from Ayodhya to Lanka in pursuit of the demon king, Ravana who had kidnapped his wife, Sita. Then Lord Rama was advised to worship Shiv lingham and he is said to have constructed the original lingam of sand, after getting tired of waiting for his brother, Lakshman to bring an idol. The name is etymologically derived from the Sanskrit word for an idol made of sand - Valuka Iswar, an avatar of Shiva.

As the story progresses, later when Ram was thirsty, as there was no fresh water readily available (except sea water), he shot an arrow and brought Ganga over here. Hence Bana (arrow in Sanskrit) Ganga. The water that feeds the tank stems from an underground spring at that spot, despite the proximity to the sea.

The temple and the attached fresh water Banganga Tank were built in 1127 AD by Lakshman Prabhu, a Gaud Saraswat Brahmin minister in the court of Silhara dynasty Kings who ruled Thane, and the islands of Mumbai during 810 to 1240 AD. The temple was destroyed by the Portuguese during their reign over Mumbai (Portuguese Bom Bahia) in the 16th century.

It was rebuilt due to the generosity of Mumbai businessman and philanthropist, Rama Kamath, another Gaud Saraswat Brahmin (known in British records as 'Kamati') in 1715. The main temple has been substantially reconstructed and many smaller temples have come up around the Banganga Tank. By 1860, the temple started attracting greater crowds and 10 to 20 other temples had come up around it and 50 dharamshalas.

The temple is generally busy every month only during the full moon, and at Amavasya (new moon). In the past it was a favorite of the Malabar pirates who used to frequent the islands during the 16th and 17th centuries.

It is currently the site of an annual Hindustani classical music festival, which in 2005 featured musicians like classical singers Rajan and Sajan Mishra, and Santoor maestro Shivkumar Sharma.