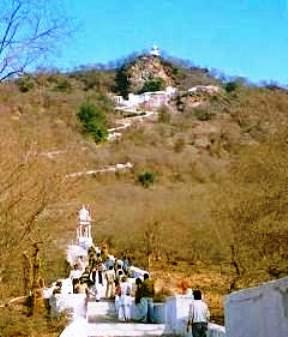 The temple is located in Ramgarh hill of Baran district in Rajasthan.

On the top of the Ramgarh hill, Kisnai and Annapurna Devi temples are situated in the natural cave. About 750 stairs were constructed by Jhala Jalim Singh for reaching the temple on the hill top. The main speciality of this temple is that one Devi is worshiped with Meva and another is with Mas-Madira. At the time of Parshad, curtain is raised between the two Devis. Fair is also organised during Kartik Purnima.

Other attractions is Bhand Devra Temple Ramgarh-Bhand Devra temples are situated about 40 Km. from Baran. The Shiv Mandir of Ramgarh was built in 10th century and are based on the Khajuraho style. Due to the Maithun Statues, the place is named as Bhand Devra. This temple is situated on the bank of pond and now under the Archaeological department. This temple is known as Rajasthan's mini Khajuraho.