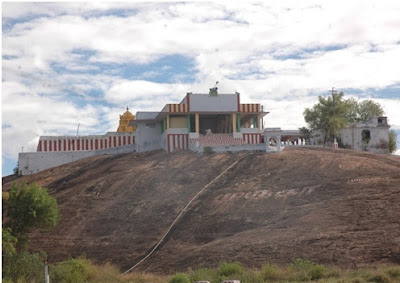 
Siva giri is 108 km from Madurai on the Kuttralam route. The temple is 1 km from the bus stop. Auto facility is available.

Lord Muruga, after destroying demon Soorapanma, was returning to Tiruparankundram to wed Mother Deivanai.  Sage Agasthya was performing penance in the place seeking the darshan of Muruga.  Lord, on His way granted darshan to the sage and stayed in this place as wished by the sage.  The temple was built later.  As the Lord appears here as a little child – Bala – He is praised as Balasubramania.


The Pada Mandapam of the temple is at the place where Lord granted Darshan to Sage Agasthya. The Shivalinga is nearby.

There are shrines for Lord Dakshinamurthy, Lord Mahavishnu, Mother Chandikeswari, Bhairava, Navagrahas the nine planets, Sani Bhagwan, Mother Ashtabuja Durga and Idumban.  There is also a separate shrine for Lingodhbava in the ghoshta wall with Brahmma and Chandikeswara nearby opposite to each other.  There is a shrine for Mother Kali in the middle of the hill.  The first puja is offered to Her at morning and evening Sayaraksha.  Special pujas are dedicated to Her on full moon days.  Lord Muruga in the temple is praised as Navagraha Muruga.  Vinayaka is known as Anugnai Vinayaka.


Those facing adverse planetary aspects, to children in particulars and those suffering from paralysis pray here for relief.

Speciality of the Temple :


1. Lord Muruga grants darshan with his turf mated up as a crown.

2. A metal piece – thagadu – is placed at His feet with zodiac symbols as He assures relief to the devotees from planetary problems.  This is a rare form of Lord Muruga, The NavaGraha Muruga.  Those facing problems, pray to the Lord on the day attributed to the particular planet.  Pujas are performed in the temple as per Tiruchendur procedures.

3. Skanda Sashti in Murugan temples are celebrated for 6 days or 7 days with the wedding festivals.  Here the festival is celebrated for 11 days.  Soorasamharam-killing demon Soora-is celebrated on the 6th day, Muruga on the horse vahan,  The wedding festivals takes place the next day.  The coronation festival to the Lord is celebrated on the 11th day placing the Lord on the throne with gold crown and the Sengole the stick representing the royal authority.  He comes then in procession in His royal robe known as Pattina Pravesam – entering the city.  This is a famous festival of the temple.

4. Among the Saivite saints, Tirugnanasambandar was graced with the wisdom milk fed by Mother Parvathi.  He is considered as the incarnation of Lord Muruga.  This festival is celebrated in the temple on the 6th day of Panguni Brahmmotsavam when the Lord is fed with milk remembering this event.  During this festival, Lord Muruga appears with red in the morning puja (Sivappu Sathi) with Lord Shiva attribute, in white in the midday with Brahmma attribute (Vellai Sathi), in green dress as Vishnu (Pachai Sathi) on the third puja in the next morning.  He goes for the river bath (theerthavari) on Panguni Uthiram day.

5. Somaskanda:  The shrine is situated in an environment of scenic beauty surrounded by hills and water resources.  The temple is on Sakthi Malai, Sakthi-Mother.  Shiva hill is on the left.  The temple is in Somaskanda – Lord Muruga with Shiva and Shakti on both sides. On the right of Muruga shrine is Lord Sundareswarar and Mother Meenakshi on the left.  Procession deity here is Shanmugar used in Panguni Brahmmotsavam.  The procession darshan is available to the devotees only for three days during the festivals. Darshan during other days can be had only within the temple.

Panguni Brahammotsavam in March-April, Aipasi Skanda Sashti in October-November, Vaikasi Visakam in May-June and Masi Magam in February-March are the festivals observed in the temple.