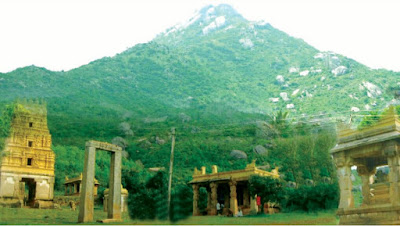 The Sidilu Mallikarjunaswamy temple on the top of Bettadapura hill is one of the hidden marvels of Karnataka.
How to reach:  Bus: There is a direct bus which goes to Bettadapura from Bangalore. Alternately, board a bus to Mysore, from there, there are buses bound towards Hassan via Bettadapura.
Car/Bike: Head on SH17 towards Mysore, after Srirangapatna, turn towards Elvaala to join Mysore-Madikeri road. Continue on the road till Periyapatna. At Periyapatna, turn right towards Bettadapura on State highway 21. 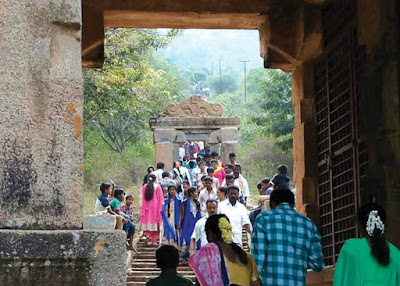 Bettadapura or "Land of Hills" is known for the famous Sidilu Mallikarjuna Swamy temple which was built by the Cholas more than 1000 years ago and has not been damaged much as the visitors have to climb a hillock to reach there through a flight of 4000 steps. Bettadapura is home to the Sankethi community which migrated from Shankottai in Tamil Nadu around 600 years ago. From Bettadapura they migrated to several other villages along the banks of Cauvery. 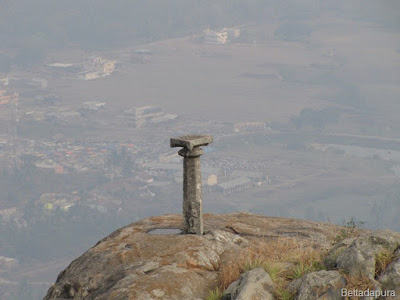 One significance of the temple is the fact that the temple is believed to be hit by lightning at least once a year around Deepavali time. Hence derives the name "Sidilu" meaning lightning in Kannada. Also a jaatre or procession is held once a year during Deepavali in which many people from the surrounding villages take part by carrying the idols of Lord Ganesha, Shiva and Parvati to the top of the hill and bring it back by evening.

It becomes difficult to climb as the day sets in. There are mantaps at regular intervals for a quick power break. At around half way mark one can see the ruins of the ancient Veerabhadra temple which has a Shiva Linga guarded by the Nandi bull. The temple is too dark from inside and is not at all maintained. This place is completely in a neglected state and is used by the climbers to relax for a while.

It takes about two hours to reach the temple. The temple premises looks wonderful and the view of the village from the top is breathtaking and its worth the effort spent in climbing around 4000 steps. The temple is built on a plateau and is a simple stone structure with a Gopuram. The inner sanctum of the temple has a Shiva Linga or Mallikarjuna which is believed to be struck by lightning every year.  There are huge copper vessels of antiquity here to indicate large scale feeding of pilgrims and the enshrined deity is also called Annadani (donor of cooked rice) Mallikarjuna.