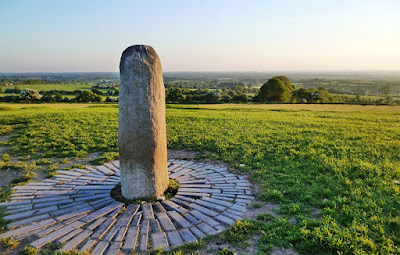 The Hill of Tara (Irish: Cnoc na Teamhrach, Teamhair or Teamhair na Rí), located near the River Boyne, is an archaeological complex that runs between Navan and Dunshaughlin in County Meath, Ireland. It contains a number of ancient monuments and, according to tradition, was the seat of the High King of Ireland.

1. In ancient Irish religion and mythlogy, Tara was revered as a dwelling of the gods and an entrance place to the otherworld of eternal joy and plenty where no mortal ever grew old. In the legends of St Patrick’s mission to Ireland he is said to have first come to Tara to confront the ancient religion in its most powerful sight.

2.  Atop the hill stands a stone pillar that was the Irish Lia Fáil (Stone of Destiny) on which the High Kings of Ireland were crowned, the stone was required to roar three times if the chosen one was a true king.

3.  According to The Annals of the Four Masters, an ancient document written by Franciscan Monks between 1632-1636 AD, this stone was brought to Ireland by the Tuatha Dé Danann, a supernaturally gifted people. Some speculate it was they who brought the power to make bronze to Ireland. They were the main deities of pre-Christian Gaelic Ireland.

4.   The Stone of Destiny looks similar to Shiva Lingam and is estimated to be atleast 5500 years old.  Irish used to worship Tara Goddess in ancient days.

In Ireland Irish people use to worship tara goddess from long many times and there is a tara hill in ireland where temple of tara is also exist.
The Druids called their mother goddess Tara; Edain Echraidhe is her Irish name. Her home is the high valley between the Hill of Tara and Skryne in the Royal City of Celtic Ireland.

Whats surprising is, that if you do a little bit of research, you find out she is also featured in ancient Scandinavia, ancient Polynesia, ancient Rome, with the ancient Druids, and in ancient native America. When comparing mythologies from around the globe you soon figure out that they all tell similar stories featuring similar characters with similar activities.


Hinduism : A Mahavidya of Mahadevi, Kali or Parvati
Buddhism : tantric meditation deity in Tibetan Buddhism
Polynesian Mythology: Tara is a beautiful sea goddess
Latin: Terra, Mother Earth
Druids: called their mother goddess Tara.
Finland: An ancient legend speaks of Tar, the Women of Wisdom.
South America: indigenous tribe in the jungle call to their goddess, Tarahumara.
Native American: Cheyenne people tell of a Star Woman who fell from the heavens to the Earth. She sent her people to mate with the more primitive inhabitants of Earth, thereby giving them the capacity for wisdom.

Description :
Liathdroim was an ancient name of Tara. The Hill of Tara has been in use by people from the Neolithic era, although it is not known whether Tara was continuously used as a sacred and/or a political centre from the Neolithic period to the 12th century.

The central part of the site could not have housed a large permanent retinue, implying that it was instead used for occasional meetings. There were no large defensive structures. Earliest extant written records show that high kings were inaugurated there, and the "Seanchas Mor" legal text (written some time after 600AD) specified that the king must drink ale and symbolically marry the goddess Maeve (Medb) in order to qualify for high kingship.
Tara is one of the largest complexes of Celtic monuments in all of Europe. In reading its landscape we are transported back in time to when the first settlers came here 6000 years ago. They and the Celts who followed them chose Tara as a very special site.
When you enter the Hill of Tara site through the entrance gate the first structure you will come to a statue of St Patrick followed by the church and churchyard.  The present church building and churchyard wall date from 1822. There were 2 previous churches on the hill – the first one was built in the 13th century. A much larger church succeeded it. Part of this second church’s outer wall can still be seen near the top of the steps in the churchyard.  The earliest grave stones here date from the 17th century. A memorial stone of the local Dillan family in the church itself is dated 1595.
To the right at top of the stairs in the churchyard there are two stones – remnants of a time when there were many stone monuments on Tara.  The taller of these two remaining stones is thought to feature a figure of the celtic fertility god Cernunnos.

During the rebellion of 1798, United Irishmen formed a camp on the hill but were attacked and defeated by British troops on 26 May 1798 and the Lia Fáil was moved to mark the graves of the 400 rebels who died on the hill that day. In 1843, the Irish Member of Parliament Daniel O'Connell hosted a peaceful political demonstration on Hill of Tara in favour of repeal of the Act of Union which drew over 750,000 people, which indicates the enduring importance of the Hill of Tara