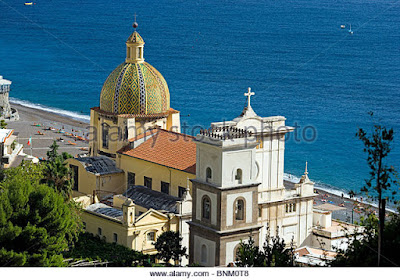 The Byzantine icon is surrounded by many popular traditions in Positano, including the miraculous arrival of the icon in town. In the 12th-century, the icon was aboard a cargo ship that was stuck off the coast of Positano when the winds died. According to the legend, the sailors heard a voice calling, “Posa, posa!” (“Put me down, put me down!”) When the captain of the ship understood that the icon wanted to go to Positano, the winds picked up again immediately. The sailors brought the icon to shore and the people of Positano chose the Virgin Mary as their new patron saint. Inside the church to the right of the altar is a painting depicting the blessing of the icon, which you can also see through the arch to the left.

Another legend tells of the panel being stolen by pirates. When they tried to leave Positano's shores, a terrible sea arose preventing their passage.  From sea, they could hear the cry of "posa, posa," translating to "put it here."  The fearful pirates set the panel back on shore and the storm ceased, allowing them to flee the area.  The villagers built a church on the spot where the panel was returned and the town grew around it taking on the name Positano.

It is nearly impossible to descend to Positano's beach without landing first in front of the Santa Maria Assunta church.  The famously green tile domed church is the town's most famous icon and eagerly sought after by painters and photographers, as well as couples from all over the world seeking the perfect wedding photo backdrop.

The Positano landscape is mostly recognisable by this great shiny dome of the Chiesa di Santa Maria Assunta e Cripta Medievale, it looks picturesque and is the historic landmark in the heart of the Positano. The Chiesa di Santa Maria Assunta e Cripta Medievale probably dates back to the 10th century, the church is a typical example of the architecture found in this beautiful area, its interior is classical, white and gold, with a 13th century 'Black Madonna' icon above its altar with crypts below. During restoration works of the square and the crypt, a Roman villa was discovered; still under excavation, it is closed to the public. From the beach you can go up some stairs to the church and the views from the church are great. If you are coming from the main road by Sita bus then you have to walk down the hill for about 10-15 minutes.

Given its lovely setting right in the center of Positano, the Church of Santa Maria Assunta is one of the most popular locations for destination weddings on the Amalfi Coast. Couples travel from all over the world to marry in this beautiful church and have their wedding photos taken with Positano as a backdrop. 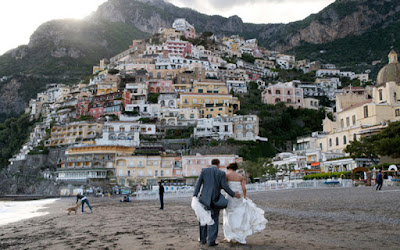 No visit to Amalfi can be considered complete without having enjoyed a stroll through the town's labyrinth of little lanes and alleyways or a trip to the Paper Museum, in Via delle Cartiere 24, in the historic Cartiera Milano.
The production of hand-crafted paper, known as bambagina, is one of the oldest of Amalfi's traditions and today remains part of the town's culture and identity.

During the festival for the Assumption of the Virgin on August 15th, the town of Positano celebrates their patron saint with processions recreating the arrival of the icon in town, special events in the church, celebrations for the Ferragosto holiday on the beach and a firework display after dark.