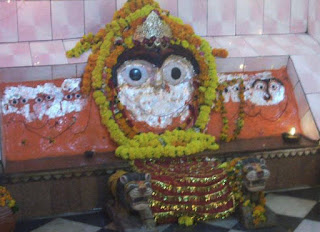 Location : On a high hill which is near about 1000 ft. high and 10 kms. Away from Indragarh Sumerganj Mandi. It is in Bundi District of Rajasthan which is 160kms from Jaipur.

This ancient temple was built as the popular opinion goes, 2000 years ago in Vikram Samvat 103 by Kamal Nath who was a great devotee of Goddess Durga. His unflinching devotion to the Goddess propitiated the Goddess and she appeared before him. This idol of Beejasan Mata (Mother Goddess Durga) seated on the demon Rakta Beeja. In Markendeya Puran, the great exploits of Goddess Durga are narrated which are now known as Shri Gurga Shaptasati. In the eighth chapter of Shri Durga Shaptasati we read the Chivalrous shape of Durga when she waged her fierce battle against the demon Rakta Beeja. This demon had been blessed with an extraordinary kind of boon. Every drop of his blood falling from his body on earth would turn into a Rakta Beeja of the equal power and equal prowess.

The result was that there were millions of Rakta Beeja demons. Finally the Goddess decided not to let the blood of these demons fall on earth. She therefore, with burning torches either burnt the wounds or collected the falling blood in a bowl and drank it up. The goddess also took as many forms as the demon Rakta Beeja had. Thus the Goddess quelled and killed the demon Rakta Beeja and hence this name Beejasan was given to her. 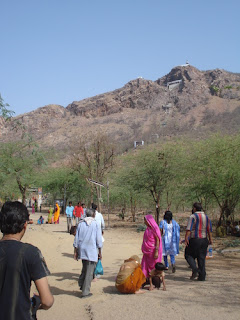 The Goddess is deemed to be very powerful and shows instant miracles. It is believed that the blind can regain their lost sight with the grace of the mother. Various people with various kinds of wishes come to the Goddess – have their wishes fulfilled because of the strong faith in the powers of the Goddess. Pilgrims, visitors etc. visit the temple throughout the year.

Navratras are performed with great enthusiasm and devotion in the month of Chaitra and Ashwin. At this time, big fairs are held. Those whom whished are fulfilled offer artificial eyes to the goddess.

Like all other temples of Shri Durga, pooja is performed with full elaboration. Shri Durga Shaptasati is recited here. Four times in a day, Aaratis are performed viz., Mangala, Bhog, Sandhya and Shayan. Local people and people from outside come to this temple. Newly wedded couples pay their first visit and their newly borne babies are brought to the temple for the first time ritual shearing of their hair called Mundan Sanskar.

http://devasthan.rajasthan.gov.in/images/bundi/bijasanmataji.htm
Posted by Rajesh. CTR at 5:51:00 AM