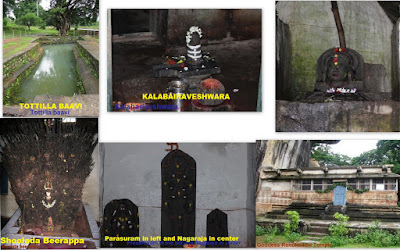 Chandragutti is situated at a distance of 16 kms from Soraba (main bus stand). Soraba is one of the beautiful villages in Sahyadri ranges.

Chandragutti is a religious center for goddess Renukamba wife of Jamadagni and mother Parusharam. The temple is situated on top of a hill which is completely covered with greenery. In short it’s very scenic. As soon as we reached the entrance of the temple we were welcomed by a small pond which is known as “Tottila baavi” and also there is small rock on which foot prints of main deity is carved. Once we crossed few steps, on to the right hand side there is a small temple of “Kalabairaveshwara”. In this temple lord is in both human and in “lingam” form. Few steps from this temple towards hill top will lead to Renukamba Temple.

By the time we had reached this place temple was closed. We got to know by a villager that this temple will be open for full day only on Tuesday and Friday and rest of the week temple is opened for few hours in morning. Since the temple was closed we could not see main deity, we could see “Matangi” seated along with her company in between two huge rocks. The main deity is inside a cave with golden coverings or golden statue as people say. 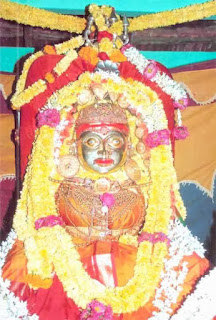 Along with this goddess there are 2 more temple, one of sacred seven headed “Nagaraja” (snake god) and “Parusharam” right in front of the Goddess Renukamba and the other one is of “Shoolada Beerappa”, there is a stair way which leads towards down the hill here is the temple of Shoolada Beerappa. This Shoolada Beerappa has hundreds of tridents (thrisuhla in Kannada) emerged from earth. Behind this is a small pond known as “Ammanavara Honda”. In south India “Ammnavaru” means goddess. Water for this pond comes from a bigger pond from top of the hill known as “tavarakere” (tavare means lotus in Kannada). The same water continues further ahead and reaches Tottila baavi

How to reach – We took a bus from Sagara (our main point) to Soraba and then from there another bus to Chandragutti, it was the same for return also. There are many (private) buses to Chandragutti from Soraba, Shimoga and very less direct bus from Sagara. Chandragutti is 106 kms from Shimoga. It can be reached from Soraba (approx 16kms), Siddapur (approx 18kms) and from Sirsi (approx 40kms) Sagara(approx 45 kms). Nearest Railway Station is Shimoga (106 Km).

See also
As Chandragutti and Gudavi Bird Sanctuary or on the same road, one can visit these two together. They both a have difference of approx 10-12 kms from each other. From Soraba first comes Gudavi, at one point we need to take a right turn and continue approx of 6 kms from this Turing point.
I thank articles on net, my friends and villagers for helping me with the info.

Every year, there is a gathering of as many as 200,000 of her devotees at the Yellamma Gudda temple in Saundatti. This temple is an example of ancient architecture and dates back to the Kadamba period. Another temple is in Mahur, Maharashtra, the supposed birth place of the goddess, which finds mention in Devi Gita, the final chapter of Devi Bhagawatam as, "Matripura in the Sahyadri mountain; here the Devi Renuka dwells...". ( Renuka devi Temple, Mahur )

Legend has it that Renukamba, a king of the Chandragutti region, was married to Rishi Jamadagni. The king had got Renukamba as daughter after he offered prayers to Goddess Mookambika.

Renukamba was such a devout wife that she could carry water in pots made of sand and she is used to carry the water pot on her head with snakes as pads for the pot. Not a single drop of water fell from her pot.

But once Sage Jamadagni doubted her character and asked his son Parashurama to kill her. Parashurama took his mother to the cave at Chandragutti and cut her head leaving the torso in the cave. He took the head to his father. Sage Jamadagni offers a boon to Parasurama who in turn asks the life of his mother. The sage immediately gives the boon and Renukamba is brought back to life.

This divine incident is believed to have taken place at at Chandragutti in Karnataka.

The popular festival in the temple is held in the month of March.
CHANDRAGUTTI RENUKAMBA TEMPLE CONTACT ADDRESS