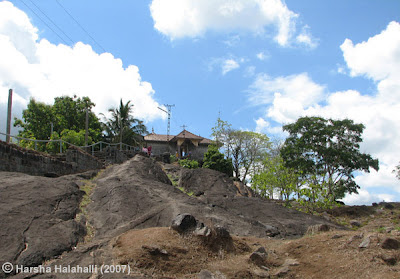 About 800 years ago, two brahmin youth Karinjattaya and Ichlattaya brothers arrived at Kumbla county from Uttara Kannada for publicising Sanatana belief. At that period Tulunadu was ruled by Taulava King. Bhoota worship was the ritual in practice at that time in this region. The place where Ichlattaya settled was called Ichlampady and the other by Karinjattaya was called Karinja. In the middle of Karinja and Ichlampady in a scenic beautiful area was built a Lord Shiva Temple. These brahmin without any decendants had given away their agricultural property along with the Temple to the Bunts who were helping them.

The Surya Sadashiva Temple is dedicated to Lord Shiva and his consort Goddess Parvati. A devotee will have to climb ( only by foot ) as many as 555 steps in order to reach the Sri Karinjeshwara temple.

Situated halfway up the hill, this Parvathi temple is surrounded by a clean courtyard, at one end of which is a new, almost completed anna chathra - a dining hall. Another steeper flight of steps leads up to the peak of he hill on which is situated the Karinjeshwara temple. The peak of the hill provides a breathtaking panoramic view of the forested foothills of the western ghats. A troop of friendly monkeys have made their home here. The leader of the monkeys is called as Karinje Dhadda. Each morning, after the daily pooja, the naivedyam is ritually offered to the monkeys.

The pond at bottom of the hill  known as "Gadha Theertha". According to the priest ,  the Gadha Theertha was carved out when Bhima knelt  down and threw his mace (Gadha) down.

The are other 3 ponds namely Handi (Pig) Theertha , Ungushta (Toe) Theertha and Jaanu (Knee) Theertha . Later, two ponds were formed when Bhima knelt down to throw his mace , according to the priest . The holy waters of the ponds are believed to contain special powers in the curing various diseases .

The most important festival celebrated in Sri Karinjeshwara temple is that of Shivaratri. This is a four day event.

During the wee hours of the morning, elaborate homas and pujas are conducted at all the temples on the first day of Shivaratri.

On the second and the most important day, the idol of Lord Shiva is carried down and united with that of Goddess Parvati. This is done amidst a lot of festivities and pujas.

On the fourth and the last night of Shivratri, Lord Shiva is once again taken to Goddess Parvati.
Both idols are then taken for a stroll and after this; they are taken back to their respective temples.