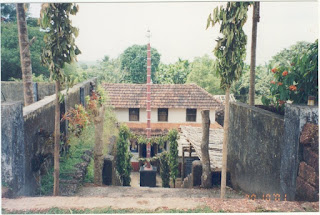 Reach Kateel from Mangalore. Nellitheertha is about 5 km away from Kateel.

While driving from Bangalore, one can take a deviation at B C Road and go through Polali and Kaikamba and reach Nellitheertha. This avoids having to travel through Mangalore.

1) The history of the temple dates back to 1487. Inside the cave, water drops keep dripping down in the shape of gooseberries (amla) to form the lake and hence the name Nelli (Amla) Theertha (holy water)

2) There was an Asura named Arunasura who managed to get the blessing of Sage Jabali and got from him the sacred Gayathri Mantra. He started misusing the power of this Mantra and began to harass the world. Maharishi Jabali was not aware of this as he was performing meditation all the while. Learning from Narada Maharishi of Arunasura’s atrocities, Jabali decided that he had to set right a situation that he in a way helped create.

It is believed that the cave in Nellitheertha was used by Sage Jabali to perform a penance to appease Lord Durga Parameshwari. Lord Durga appeared in front of Sage Jabali and assured him that she would kill the demon Arunasura. She later took the shape of a wasp and killed Arunasura on the banks of the river Nandini. At that place today is a beautiful temple of Lord Durgaparameshwari and the place is very well known as Kateel.

Nellitheertha Cave Temple dates back to at least 1487 CE. It is dedicated to Lord Shiva. To the right of the temple there is a natural cave which is about 200 metres (660 ft) long. As there is no proper gateway to the temple, the visitors are forced to crawl in on their knees to peep inside the sanctum. There is a lake and a Shiva Lingam inside it.

The main deity of the temple is Sri Somanatheshwara (Shiva). The temple also has MahaGanapati (Elephant - headed God) and Jabali Maharshi as deities here. In fact, the Jabali Maharshi Brindavana was recently constructed. In typical Tulu-naadu (Tulu is the native language in this part of the woods) tradition, the temple also has its set of "Bhootas". Bhootas are considered as the "Ganas" or warrior-assistants of the Gods. According to mythology, bhootas are appointees of Shiva and they administer the temple/village. The main bhootas of the Nellitheertha temple are Pili-Chamundi (Pili means Tiger in Tulu), Kshetrapala, Raktheshwari and Doomavathy.

The Lingam of Shri Somanatheshwara has been made out of pure Saligrama and is considered very sacred. The Lingam has been built as Ardhanareeshwara. There are other artifacts in and around the temple which are pointers to the past glory of this place. Among them are the “Arasule Mancha” (King’s seat), “Arasule Mantapa” (King’s abode) and the “Jina Vigraha” (Jain Statue). The temple of Shri Mahaganapati has been rebuilt recently and is splendid in itself.

The most beautiful aspect of the temple is the Cave. Apart from the cave, of course, there are numerous other places surrounding the temple which are worth visiting. To the east of the temple’s entrance is the Amblattapadavu hillock. This hillock is about 300-500 feet high and offers a splendid scenery from the top. One can spot places such as the Bajpe Airport, Mangalore, Panambur, the MRPL refinery and Suratkal. On a day with clear skies, one can even spot the Arabian Sea. Amblattapadavu offers a wonderful view of sunrise and sunset everyday.

The “Nagappa Kere” (Snake Pond) is a small pond situated to the north of the temple. This natural pond, along with its religious significance, is also a scenic spot. All devotees who want to enter the cave temple have to clean themselves by taking bath in this pond and only then are they allowed into the cave. The lake is at its best immediately after the monsoons (Oct—Dec) when its crystal clear water is a swimmer’s delight. There are plans to build a small herbal park around this pond as also a small deer park.

The “Arasule Mancha” or King’s seat is situated near the main entrance of the temple towards the north. Historical evidence suggests that this seat was where the king of the land used to be seated when he visited the temple. It is believed that even today, the spirits of the former rulers visits the place at night and so it is prohibited to sit on the seat after dusk.

The Nellitheertha temple is a symbol of secularism. The temple and the cave is open to members of all beliefs and castes. Any person, above the age of 5, is allowed to enter the cave irrespective of gender. Truly, Nellitheertha is a special and model place.

Another unique feature of this cave is that it is closed for nearly 6 months a year. The cave is open only between October and April. Though there are religious reasons associated with this (it is said that the cave is open 6 months a year for humans and is meant for Gods and Rishis the remaining 6 months), the point is that the 6 month break each year helps the cave to "rejuvenate". The water freshens up and the animals inside enjoy the lack of disturbance. There are plenty of animals inside the cave. The cave houses snakes of all varieties, scorpions, porcupines and huge number of bats. Troubling or hurting the animals inside the cave is strictly prohibited.

The main attraction of the temple is the cave. Situated right at the entrance of the temple towards the left of the main door, this huge cave is one of nature's wonders. Unspoilt by human indulgence, the cave is a nature lover's delight. A visit to the inside of the cave is considered a sacred and spiritual experience by devotees.

The entrance to the cave is huge and wide. Within a few feet, the trail narrows down and one is forced to bend and crawl forward. Subsequently, one has to fall flat on the tummy and crawl ahead. Finally, after about 300-400 metres, the cave widens again and we find a huge lake in there. There is a natural Shiva Lingam in front of the lake and devotees pray and worship the lingam. The most amazing part of the cave is the fine quality of the mud available inside.

It is said that the mud here has healing powers and is treated as prasadam by devotees. Right behind the Shiva Lingam, a second cave starts off. Not many people have ventured into this second cave till date. A few who have gone ahead vouch for the extreme terrain they have encountered. It surely will be challenging for the adventure lovers.

http://shivallibrahmins.com/tulunaadu-temples/mangalore-taluk/sri-somanatheshwara-cave-temple-nellitheertha/
Posted by Rajesh. CTR at 2:35:00 AM