Tiger Hill is a hill in Suzhou, in China

The hill is so named because it is said to look like a crouching tiger. Another legend states that a white tiger appeared on the hill to guard it following the burial of King Helü. The hill is sometimes referred to in parallel with "Lion Mountain", another hill near Suzhou which clearly resembles a sitting lion.

According to the Historical Records, the Wu King Helu was buried on the hill, called then "the Hill Emerging from the Sea". The legend goes that three days after his burial a white tiger appeared squatting on the hill.
History :

Since Six Dynasties period, Tiger Hill has become the famous tourist destination and Buddhist hill. In East Jin Period, Wang Xun and his young brother named Wang Min built the villa in hill respectively. In 327, they presented the villas to Huqiu Temple, and changed to be called The East Temple and West Temple.

Buddhist period :
The Buddhist master called Daosheng coming from northern China in Song Period of North-South Division period interpreted the sutra of Buddhism over here, and left many famous relics. During the Six Dynasties Period, Tiger Hill had pagoda, and the destroyed pagoda was the oldest one in China.

In Tang Dynasty, to avoid mentioning the name of Li Hu, the grandfather of Li Yuan who was the founder of Tang Dynasty, Tiger Hill, or Hu Qiu, was changed to be Wu Qiu and the temple also changed to be Wuqiubaoen Temple was also comprised of east temple and west temple. In 825, Bai Juyi acted as the governor of Suzhou, and he loved the beauty of Suzhou, especially the Tiger Hill. He made a large reconstruction to Tiger Hill, and he also made the ways to Tiger Hill more convenient, and the waterway and landway were all perfectly wonderful. And the surroundings were also beautified and elaborately designed.

Taoist era :
During the reign of Emperor Wuzong in Tang Dynasty, for raising Taoism and suppressing Buddhism, a large movement for eliminating Buddhism was launched. In 845, the property of the temple was confiscated, and the statues of Buddha were destroyed, and the monks and nuns were forced to be secularized. The east and west temples were all thoroughly destroyed. But later, the resuming of the Buddhism made the Huqiushan Temple be reconstructed, and two parts were unified. Besides, the temple was moved to the top of hill from the foot. And the whole architectural layout gradually formed the feature at present. At the foot of the hill, there are also the West-Hill Temple and East-Hill Temple in memory of Wang Xun and Wang Min.

Zen school Huqiu :
In Song Dynasty, the governor of Suzhou called Wei Yang reported the superior authority to change the name of Huqiushan Temple to Yunyan Temple. From then on, the Tiger Hill became the holy land of Buddhism and the hot destination of tourism. In 1131, roughly in the early period of Southern Song Dynasty, the Buddhist master named Shao Long interpreted the sutras of Buddhism in Tiger Hill, and Tiger Hill was predominantly influential in China, and formed a zen school of Buddhism named Huqiu School. In southeast China at the time, there are a quite famous title of Buddhism called Five Hills and Ten Temples, and Huqiu Hill, or Tiger Hill, was one of them.

Modern era :
After the foundation of New China (The People’s Republic of China), the Administrative Office of Suzhou Gardens and Relics was established in 1953, and Tiger Hill was systematically and gradually managed and reconstructed. In 1955, the Fanghe Pavilion, Yongquan Pavilion and Sunwu Pavilion were all rebuilt, and the Round-Hill River was opened as well.

It has an elevation of over 30 m. and covers about 49.41ac. Tiger Hill boasts impressive rocks, deep dales, 3 matchless scenes, 9 suitable occasions for enjoyment, 18 scenic spots, and changing scenery at all times. No wonder it has been an awe-inspiring sight in the area south of the Lower Yangtze. The Yunyan Temple Pagoda and the Sword Pool are well-known features of the hill. With a history going back more than 1,000 years, the simple, archaic and imposing Yunyan Temple Pagoda, also known as the Second Leaning Tower on earth, stands aloft at the top of the hill, serving as a symbol of ancient Suzhou for years, The Tomb of the Wu King Helu under the Sword Pool has remained an unsolved mystery for two and a half millennia. The story goes that the great Jin master Wang Xizhi traded his calligraphy for lovable geese from the Taoist Abbot. And the windy vale and cloudy spring make the visitor reluctant to leave. 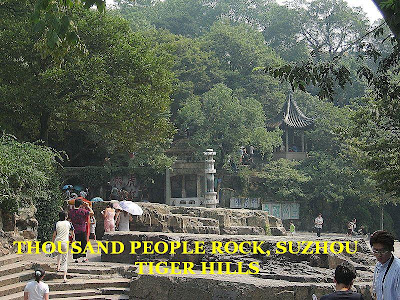 Tiger Hill is also an important site of folk fairs and gatherings. In terms of the local history of Suzhou: Three Fairs and Three Festivals. The authority of Tiger Hill Scenic Area holds the art and flower festivals or fairs in Suzhou. In autumn, diversity of temple fairs featuring the folk customs held in Tiger Hill was extensively loved by tourists. In 2002, Tiger Hill was approved to be the Four-A Scenic Area of China. The famous attractions of Suzhou Tiger Hill Scenic Area include: 1.Pagoda of Yunyan Temple, 2.Sword Lake of Tiger Hill, 3.Yongcui Shanzhuang, 4.Lu Yu Well, 5.Lengxiang Pavilion, 6.Frozen Fragrance Pavilion) and other detailed scenes. 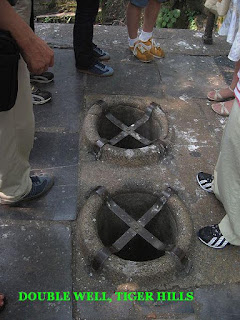 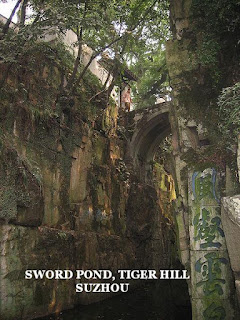