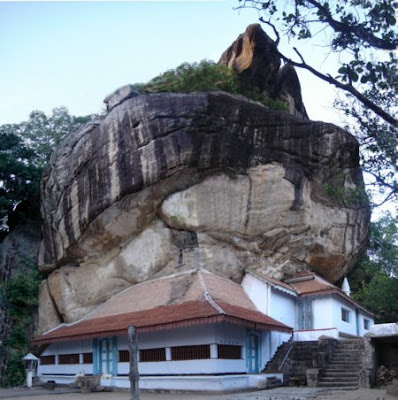 The Ridi Viharaya is a temple situated atop a hill at Ridigama (Silver village), a village 13 miles away from Kurunegala.

It is a cave temple with many interesting legends surrounding it, and is visited by Buddhists, Hindus and Christians.

Accidental Silver to finance the Ruwanweliseya Stupa
Ridi Vihara was built by the hero of the nation, King Dutugamunu who reigned in the 2nd century BC. The king lacked the funds to complete the great Ruwanweliseya Stupa (Ruwan Weli Saya dagoba) at Anuradhapura until the discovery of a rich vein of silver at the village now known as Ridigma. The new found wealth having allowed the illustrious king to carry on with his masterpiece, the king expressed his gratitude by creating a cave temple at the location of the silver ore.

Jackfruit treat temple
At the entrance to the cave temple, just before the main body of the temple lies the Varaka Valandu Vihara (Jackfruit treat temple), an exquisite little temple, which dates from around the eleventh century. Built right up against a small rock outcrop, it is dedicated to the guardian of the mountain on which the Ridi Vihara is located. The bases of the pillars are decorated with figures-a man with a spear, another with a bow & arrow-while inside the tiny shrine sits a small yellow Buddha statue & a few simple Kandyan-era paintings. When you are on the tour with us, we will, of course narrate the story of the jackfruit treat: how the temple got its name. And on tour in Sri Lanka you will be having tender Jackfruit spicy curry (Polos), ripe Jackfruit curry in sauce of coconut milk (Kiri cos) & ripe & juicyJackfruit (Varaka) as a fruit. Tropical Jackfruit, one of the largest fruits in the world, is a many splendoured love in Sri Lanka

The main rock-cut temple, Lower Temple
Beyond here, you pass through a wooden entrance pavilion (an old wooden palanquin hangs from the roof) and cross a small courtyard painted in harmonious pastel colours to reach the main rock-cut temple, the Pahala Vihara (Lower temple). Gold plated Buddha statue attributed to King Dutugamunu is kept securely inside a special case.

Pancha Nari Gataya (The knot of five maidens) in the lower temple.
To the right of the entrance to the lower temple is an exquisite ivory carving of a vase. At the close range the vase blooms into a figure of five entwined maidens. 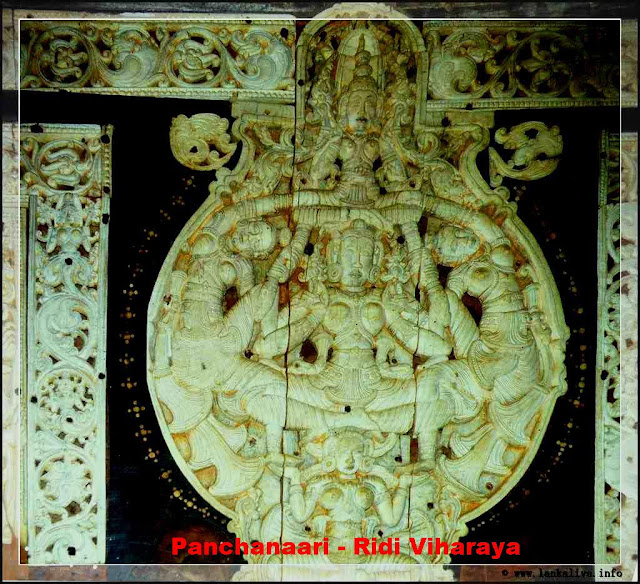 Blue & White Dutch wall tiles of Biblical stories in the lower temple
The temple's interior is surprisingly large; a veritable Aladdin's cave, its walls are covered in tessellated hundreds of Kandyan-era pictures of Buddha. A 9m recumbent Buddha rests on a platform, a flower altar decorated with a blue & white tiles that narrates Biblical stories, which were a gift from the Dutch envoy to King Kirti Sri Rajasinghe (1746-1778 AD). The king in return had gifted the tiles to the temple. Christianity being a non-violent religion, the Buddhist spirit of tolerance of faiths would have spurred the Buddhist bhikkus (monks) to see the tiles with due admiration of their quality & artistry. Banishment of Adam & Eve from the Garden of Eden, the last supper, Mosses & the burning bush, prophets of yore, dove of peace, creation of man are some of the scenes depicted in the tiles.
At the far end of cave stand from left to right statues of the Buddha, Avalokiteshvara (Natha), King Dutugamunu (the last is an extremely ancient statue date from Anuradhapura period), as well as a delicate reclining Buddha from Burma.
Upper Temple
Behind the temple, steps lead up to the right to the Uda Vihara (Upper Temple) right behind. This eighteenth-century structure is attributed to King Kirti Sri Rajasinghe. The entrance consists of Kandyan-period moonstone & steps flanked by elephants. A series of Hindu deities & images of the Buddha are located herein. 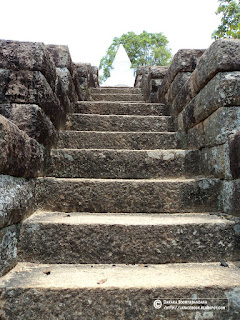 The main image of Upper Temple
In the main chamber is an impressive seated Buddha (UdaVihara Buddha) set on a busy backdrop Makara Torana (Dragon Arch) of images of gods, devotees and Buddhas. Paintings of mythological animals and King Rawana too adorn the temple.

There are more Kandyan-era decorative murals of flowers & Buddha statues inside the Cobra House; behind it, a stupa sits almost completely covered under another part of the overhanging rock. These are the paintings of "Sarpenda" and "Vrushaba Kunjaraya" (the entwined heads of the bull and the elephant).

Ancient inscription
Outside the temple complex you can see an abandoned dagoba at the top of a smooth rocky outcrop. On the way up, to your right an ancient inscription in the stone that has been etched on King Dutugamunu's behalf.

Walk
An easy 10 minute walk starts to the right of this stupa passing a modern pavilion to an abandoned villa; nearby, on the top of the cliff, is a slab of rock which affords magnificent views of hills & valleys.

Hello, I love reading through your blog, I wanted to leave a little comment to support you and wish you a good continuation. Wish you best of luck for all your best efforts. arya samaj mandir
arya samaj marriage

Thanks Harveer for your valued wishes and continued support...

Thanks for giving such useful information! Nice blog and nice place too.

nice blog,
I really appreciate your have shared useful

information , keep it up