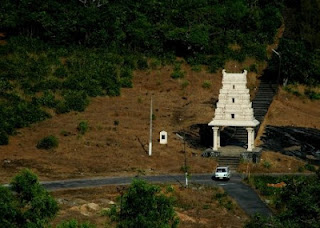 Kunjargiri is approximately 11 Kilometers from Shree Krishna Math in Udupi, five kms from Katapadi and two kms from Kunjargiri Cross road. Kunjaru is a hamlet in Kurkaal village, about 11 kms to the south-east of Udupi. This village gets its reputation owing to the temple of Goddess Durga situated on the hillock known as ‘Kunjargiri’ or ‘Durgabetta’ or ‘Vimanagiri’.

It is believed that the pious temple idol was installed by none other than Lord Parashurama himself. Hence, in the vicinity, there are temples of both Goddess Durga and Lord Parashurama.

After installing ‘Durga’ on the top of Vimanagiri, now known as Kunjargiri, Parashurama created four Thirthas- ponds of holy water. They are called Gadathirtha, Banathirtha, Parashuthirtha and Dhanusthirtha, in the four sides of Durgabetta. It is belived that Parashurama is in deep penance in the cave in eastern side below the Durgabetta even today.

Other names for the temple :

Since these high abodes of Durga and Lord Parashurama look like ‘elephants,’ it gets the name ‘Kunjargiri,’ with ‘Kunjara’ notifying an elephant. It is also called ‘Vimanagiri’ because mythology has it that gods and goddesses had flown on their flying machines (vimana) to shower floral tribute when the idol of goddess Durga was being installed by Parashurama.  The quiet surroundings coupled by green vegetation gives the name ‘Vana Durge’ to the presiding deity.

The temple is majestically situated above the top of the hill, which can be reached by the 257 well laid steps. There is a road on the western side of the hill, which also makes it convenient for the movement of the vehicles to the top of the hill. The best time of the day to visit this hill temple is the evening in case you are wanting to relish the beautiful sunset in a pious surrounding. Otherwise anytime of the day is suitable to prostrate in front of Goddess Shakti.

Standing amidst lush green hilly surroundings, the sanctity or ‘Saanidhya’ of the temple will surely keep devotees engulfed in utmost devotion. Earlier, one could find tigers also in the forest of this hill but now only peacocks, fox and monkeys can be found. The greenery and the view from the hill which is at a height of about 100 feet is breathtaking. The idol of the deity is placed at a height of about three feet inside the temple and the speciality of this place is that one can have darshan of Durga from outside itself. To the west of Kunjarugiri, there is another smaller hillock. And there is a temple of Parashurama in a Cave. To the east (at the feet of Durgabetta) there is Pajaka- the birth place of Trailokyaguru Shri Madhwacharya where the great Acharya spent his early childhood days.

The magnificent idol of Shree Durga is a Chaturbhuja (four-armed) image. It stands holding the Shanka (conch) and Chakra (discus) in the upper hands and Dhanus (bow) and Trishula (trident) in the lower hands.

She stands stamping demon Mahishasura under her feet. Apart from this temple, one can also visit the holy Theerthas, Lord Parashurama temple and Paajaka Kshethra, where Jagadguru Sri Madhwacharya took his avatara. 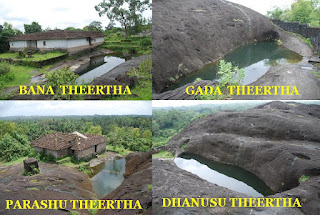 Sharannavaratri is an important festival celebrated here. Navadurga Kalpoktha Puja is performed during the days of Navaraatri. The Kannika Puja, a speciality of the Durga Temple, is offered in a grand scale. Kannika Puja is offered by the devotees as an important Seva at the temple. Many people visit this temple during Navaraatri and offer their prayer at the feet of the Goddess.


The Rathotsavam (Annual Car festival / Chariot festival) is held in a grand scale with devotion. The rituals during the Uthsava are very elaborate and have their own special features. The Dhwajaarohanam is performed on the Maagha Shuddha Trayodashi day. The Rathotsavam is celebrated on Maagha Shuddha Poornima day. Feasting (Maha – Annasantharpane) is held on this day and thousands of devotees participate in it to take Prasadam. Many people also gather near the Shrine to witness the spectacular Rathotsavam on that night.

The annual ritual of ‘Rashi Puja’ is performed during the Amavasya (New moon day) following the Rathothsava. Many devotees participate in this ritual and offer their prayers to the Goddess.

On the eve of Sowramana Yugadi ‘Kani’ is kept here and ‘Panchangashravana’ is done on the Sowramana Yugadi day in the morning. Ganapathi Homa is performed during the Ganesha chaturthi and the Krishnaashtami is specially celebrated by offering special pujas to mark the occasion.

Dhanur Puja is offered during the Dhanurmasa and Paschimajagara Puja is offered in the month of Karthika. Both Pujas are offered at the dawn during the respective months. Apart from the above festivals and rituals Rugupakarma is also observed here.

Excellent blog...all information are accurate and exactly as per tradition and belief. Only correction I would suggest is that the 'paschimajagara pooja' must be corrected as'pakshijagara pooja' which means the pooja to be performed early morning by the time birds wake up. This is commonly performed in Udupi Sri Krishna temple and all other prominent temples of parashurama kshetra. i.e: the land reclaimed from ocean god by Lord Parashurama from Gokarna to Kanyakumari. Thanks alot for such wonderful explanation about the temple near my birthplace.