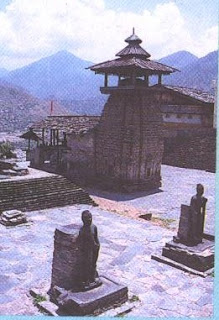 Name :  Lakhamandal - Laksha Grah
Location :
Lakhmandal is situated in Uttaranchal on the bank of Yamuna at a distance of 35 kms. from  Chakrata  and 128 kms. Past Kempty Falls, 75 kms on the Mussoorie-Yamnotri road lies Lakhamandal, having a historical as well as mythological significance.
Legend :
It figures prominently in epic book of Mahabharata. Legend has it that the Kaurvas made a shelter house and conspired to burn the Pandavas alive here. It is believed to be the place where the Kaurava's tried to kill the Pandava's by burning down their castle at Lakshagrah. For a road map, see here.
Description :
Chakrata known for its serene environs and pollution-free atmosphere, is situated at a distance of 98 kms from Dehradun at an elevation of  about 7000 ft(2118 mts). It is having a cantonement township and the northern part of Chakrata sub-division provides a fascinating landscape for trekkers and nature lovers. Virgin forests of conifers, rhododendrons and oaks are best suited for long walks.
It contains temples dedicated  to  Diva, The  five  pandava  brothers,  Parasuram and Kedar.   In  order  to  burn  the Pandavas, the Kauravas had built their 'Laksha Grah' (house of lac).  The  two remarkable well executed figures in stone of Arjuna and the other of Bhima are available in the village.
What survives of Lakshagrah is supposed to be a pretty deep cave on top of a hillock, about 10minutes walk from the village. From the cave a tunnel is said to exist leading to the Yamuna Riverbed nearby, in which the Pandava's are said to have escaped the fire. 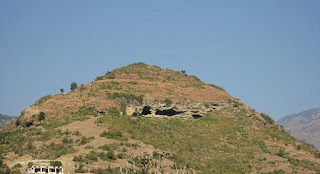 Excavations are still revealing ancient artifacts near the temple, see the half excavated shivling above. Behind the main temple is a "shining" shivling, if you pour water on it, it becomes shiny and you can see yourself in it! 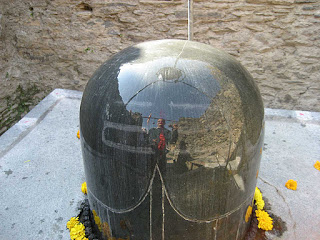 Other places of Interest :
There are numerous Waterfalls (Tiger falls, Moigad falls) on the way and one can visit the Ashoka Pillar Rock Edict at Kalsi, built in 450 B.C., which represents the post-warfare era when king Ashoka converted himself to the Buddhist faith.
Websites :
http://dehradun.nic.in/chakrata.htm

http://www.pandeyji.com/chakrata/lakhamandal.cfm
Posted by Rajesh. CTR at 5:11:00 AM