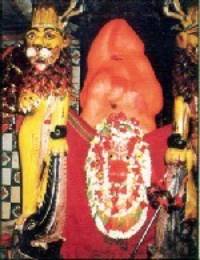 This is an ancient shrine at Kulada, Ganjam District in the state of Orissa in India. The temple is about 8 km from Bhanja Nagar, 102 km from Chhatrapur and 140 km from Bhubaneswar. The nearest railway station is at Berhampur, 88 km away.

Its people's believe that there were three sisters (including Upper Bagh Devi). One is more upper of current Upper Bagh Devi Temple is also called as Bada Raula (may be means big sister) and there is another temple simply called as Bagh Devi (youngest sister) near to Jagannath Temple.

People say that these three sisters always fought each other for Coconut and then once decided that they can divide the region who will stay where. So they throw three Lotta (type of rounded drinking container widely used in Orissa for drinking water). One stuck in the same place where Bada Raula is staying currently, second one stuck in the place where today called as Upper Bagh Devi and the third one was fallen into a Pond which currently a temple which is below the ground level.

Then Kavi Samrat Upendra Bhanja got indication from devi (through dream) that he may need to build temple in these places. Gradually the temple were built and renovated but the Bada Raula's Temple was never built since it is very difficult to go there as there is no steps to go there till now.

Kulada is famous  for  Goddess Bagh Devi which is the  presiding deity, Kulad is said to be birth place of great Oriya Poet Kabi Samrat Upendra Bhanja.  It is situated to the north west of Ganjam District with a ruin fort, river Mahanadi flowing in the east and dense forest in the west side of the ruined fort. Legend speaks that during 12th century a Bhanja ruler had joined hands with a tribal leader’ KULA’ to be eradicating the foreign invasion. Seeing the danger from the tribe he stained the tribal leader KULA and on the same place, constructed a fort which was later known as Kulad / Kulargad.
The presiding deity of the temple is Goddess Bagh Devi. The original temple is at the top of the hill known as Upper Bagh Devi with 210 steps. Upendra Bhanja spent his term in meditation at this place. As the steps are yet to be made and the route is very tough for climbing another temple of Goddess Bagh Devi has been constructed near the road where people in large number gather to worship. Kulad has many other temples also. The other important temples of Kulad are Temple of Lord Jagannath, Mausimaa temple, Ratneswar Mahadev temple etc.