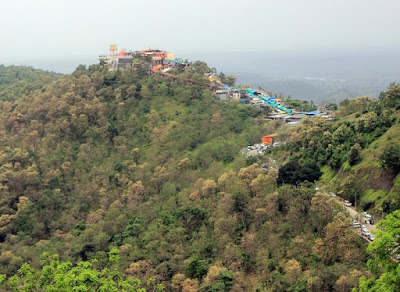 Mahur is the abode of the goddess Renuka, mother of Parshuram, an incarnation of Vishnu. The place is in Kinwat about 130 km away from Nanded in Maharashtra.

The legends of Renuka are contained in the Mahabharata, the Harivamsa and in the Bhagavata Purana.

Renuka raja (father of Renuka) performed an yajna — a ritual performed to maintain peace and good health. He was blessed with a daughter, who originated from the fire of this yajna. Renuka was a bright and active child and became the most beloved child of her parents.
When she was eight, Agastya, who was the guru of the Renuka Raja, advised him to have his daughter married to Jamadagni when she reached maturity. Jamadagni was the son of Ruchik Muni and Satyavathi and had obtained the blessings of the gods by performing severe penance. Renuka and Jamdagni Muni lived in the Ramshrung mountains, near the present day Savadatti area of Belgaum district. Renuka helped the Jamdagni Muni in all of his tasks of performing various rituals and puja. Gradually she became close and dear to Jamdagni.

Renuka would wake up early in the morning to bathe in the Malaprabha River with complete concentration and devotion. Her devotion was so powerful that she was able to create a pot to hold water made only of sand, one fresh pot every day. She would fill this pot, on the bank of the river and would use a snake which was nearby, turning it into a rope-like convolution and placing it on her head, so that it supported the pot. Thus, she brought the water to Jamdagni for his rituals of oblation. ("Renuka" is derived from the Sanskrit for "fine grain of sand".)
Renuka gave birth to five sons: Vasu, Viswa Vasu, Brihudyanu, Brutwakanwa and Rambhadra. Rambhadra was the youngest and most beloved, gaining the favour of Lord Shiva and Parvati and hence called Parashurama (the sixth incarnation of Vishnu).

One day when Renuka went to the river, she saw Gandharva spirits playing. These were young couples carelessly frolicking in the water with abandon. For a moment, she lost her concentration and devotion and fantasized about playing in the river with her husband. She wished she and her husband had such fun sometimes too, living so close to such a beautiful place. After some time, Renuka came to her senses and cursed herself for her indiscretion. She hurriedly bathed, as she had lost precious time, and tried to create the pot, but was unable to as she had lost her concentration. She even tried to catch the snake but it disappeared. Disappointed by this, she returned to the ashram in shame. Seeing Renuka returning empty-handed, Jamadagni became furious and angrily ordered her to go away.

After being cursed by her husband, Renuka went east and sat in the forest to meditate. In her penance, she met with the saints Eknath and Joginath; she prayed to them and asked to gain the mercy of her husband. They first consoled her, then instructed her to follow their advice exactly as told. They told her to purify herself, first bathing in a nearby lake, and then to worship a Shivalinga, which they had given to her. Next, she should go to the nearby town and beg for rice from the houses (this ritual, called "Joga Bedodu", is still carried out by women during a particular month in Karnataka). After collecting the rice, she was to give half to the saints and cook the remaining half, adding jaggery, partaking of the cooked rice with full devotion. They said that if she performed this ritual for three days, she would be able to visit her husband on the fourth day.

Jamadagni was still furiously angry with Renuka and ordered his sons to punish their mother. One by one, four of them refused flatly. Jamadagni, who possessed the power to burn anyone to ashes with his one look, was so angry that he went berserk and turned four of his sons into four piles of ashes. Parashurama, who was not there when this happened, found his mother weeping by the piles of ashes when he arrived and his father was still raging mad. Jamadagni told him what happened and ordered him to behead his mother for her infidelity. Parushurama had to think quickly. Knowing his father's powers and the extent of his anger, Parashurama immediately obeyed his father, using his axe.
His father then offered a boon to Parushurama, who asked for his mother and brothers to be brought back to life. To everybody's astonishment, Renuka's spirit multiplied and moved to different regions. Renuka was back as a whole too. This miracle inspired her sons and others to become her followers, and worship her.

In many traditions, Renuka and Yellamma are taken to be two names for the same goddess. However there is also an oral tradition that distinguishes between the two. According to these tales, Renuka fled to a low-caste community when her son Parushurama was coming to kill her. He found and beheaded her, along with a low-caste woman who had tried to protect her. When he later brought them back to life, he mistakenly attached the woman's head to Renuka's body, and vice versa. Jamadagni accepted the former as his wife Renuka, while the latter remained to be worshipped by the lower castes as Yellamma, the mother of all. Matangi, Renuka, and Yellamma are all names of the Goddess of the lower castes.


About the goddess Renuka the following anecdote is told.

Renuka was the daughter of the king Renu of Kubaj country and the wife of the sage Jamadagni. When the king Sahastrarjuna paid a visit to Jamadagni in his abode, he was taken by surprise by the hospitality of the sage. When asked about the same, the sage told him that it is all because of the Kamadhenu, i.e., cow that fulfils the desires of the owner given to him by Indra, the king of the Gods.


Thinking that if the Kamadhenu was in his possession he would be able to maintain his vast army easily, the king Sahastrarjuna tried to seize the Kamadhenu from the sage by farce when his request to hand over the Kamadhenu to him was turned down by the sage. In the scuffle that ensued the sage died and his wife Renuka was injured due to 21 wounds she had received at the hands of the king. At this juncture many soldiers appeared on the scene from the body of the Kamadhenu by divine magic and farced the king to retreat.

On coming to know of the above incident Parasuram, the son of Jamadagni who rushed there vowed to defeat and punish the king 21 times. His mother asked him to cremate his father. He carried his father and mother to Mahur and cremated his father there. His mother became a sati.

The religious rites were conducted on this occasion by the God Sri Dattatreya himself. However, after everything was over Parasuram was stricken by grief and at this time a voice from the heavens told him that his mother would came out from the earth but he should not look behind. Being eager to see his mother, Parasuram just saw behind far a fraction of a second to find the mother's face aver the earth. The upper facet is the present upper facet of the Renukadevi. 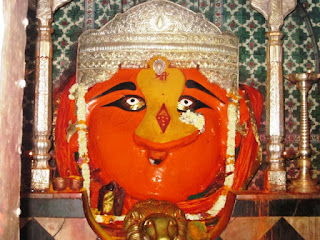 Mahur is amongst the four places of pilgrimage having the abodes of the three and a half goddesses that are of major significance in the state of Maharashtra. The other three are Kolhapur, Tuljapur, and Saptashrungi and Mahur is half, because it is only the head of the goddess that is visible (maybe because the body is of Yellamma).

The three important temples of Renuka mata, Dattatreya and Anasuya temple are built on three mountain ranges. Mahur is surrounded by Jungles which bear wild animals like peacocks , deers, black bears and panthers. In these forests Teak wood trees are more.

The importance of Datta temple here is that unlike other Datta kshetras where we find Padukas of Datta,the idol of Lord is been worshipped. Devotees believe that the Lord Dattatreya was born here.


Datta bhagavan is known as Chiranjeevi or the immortal avatar. So it is believed that he dwells in SOOKSHMA ROOPA or the minutest form in all his kshetras. So it is believed that Mahur is also a place where DattaGuru comes to sleep. As per the belief the saying goes that Datta Prabhu takes his NITYA SNAN (daily bath) In Meruwada Talao in Mahur, BHIKSHA(Meal served to a sadhu) at Kolhapur,BHOJAN(food) at Panchleswar and gets back to sleep in Mahur. Devadeveswar Temple is the nidra sthan of Lord Dattatreya.

Anasuya mata is wife of Atri Mahamuni. She is once tested by Brahma, Vishnu and Maheshwar to prove her loyalty towards her Husband. As per Indian mythology The trinity went to Atri’s home in his absence and asked Anasuya mata to give them Bhiksha(food). When she was ready to serve them, they insisted that she has to Serve them with a nude body. Then with her devotion and Bhakti she turned all the three into babies and fed them. Finally impressed by her devotion she was given a Boon of her choice and then she wanted all three to be her sons. That is how Lord Dattatreya took birth on Earth at Mahur and from then he had been existing on earth To bless his devotees. Anasuya mata mandir is famous at Mahur. We can get shared autos from Renukadevi temple to this place.

It is believed that the temple has been constructed by a Yadava king of Devgiri about eight or nine hundred years ago. The temple of Renukadevi is located on a hill top. There are carved caves in the hills around Mahur.


The main deity Head alone idol is Swayabhu. Doli facility is available for the convenience of the devotees who cannot reach the temples on the hill top.

The temple is coloured in RED colour and here BEETLE LEAVES are offered as Prasad. Here pan patta and supari are grinded as paste and offered as prasad. People believe that Mata blesses all those females who offer her beetle leaves. 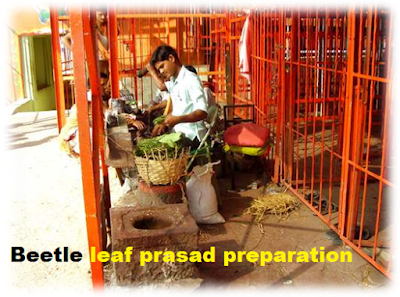 Mahur is pilgrim Centre of great significance. It is considered to be one of the Shaktipith of Maharashtra. On the day of Dasara every year a very big fair is held in honour of Renukadevi.

Thousands of people come to get blessings of Renuka mata on Navaratri Festival.

Other places to visit :

1.Chinthamani Ganapathi Temple: 20 km from Yavatmal at Kalam ,Chinta mani Ganesh temple is there. It is one of the eight Ganesh temples in Vidarbha and it is the only temple where deity faces south. The temple is 20 feet below the ground level and it is said that every 12 years the temple is submersed in water comes out of the well.Chinthamnai Ganapathi ‘s anugraha is also mentioned in Shree Gurucharitra at Ganagapur temple by Sri Nrusimha saraswathy swamy to his disciples.