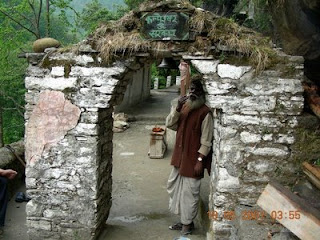 Kalpeshwar the Shiva Temple located at an elevation of 2,200 m (7,217.8 ft) in the picturesque Urgam valley in the Garhwal region of Uttarakhand state in India. The temple’s ancient legend linked to the Pandavas, heroes of epic Mahabharata eminence is the fifth temple of the Panch Kedars (five temples) of Shiva’s five anatomical divine forms; the other four temples in the order of their worship are Kedarnath, Rudranath, Tungnath and Madhyamaheshwar temples; all in the Kedar Khand region of the Garhwal Himalayas.

1) The epic legend narrated on the creation of the Panch Kedar temples is that Pandavas of Mahabharata epic history, while chasing Lord Shiva to seek his pardon for the fratricidal sins committed by them during the Kurukshetra war, realized that Shiva, in order to distance himself from the Pandavas, took the incognito form of a bull. But when this form of Shiva was discerned by Bhima, the second of the Pandava brothers, tried to hold on to the bull's tail and hind legs. But the bull vanished underground at Guptakashi. Subsequently it reappeared in five different forms: His hump appeared at Kedarnath, his bahu (arm) was spotted at Tungnath, his head surfaced at Rudranath, the stomach and navel were traced at Madhyamaheswar and his jata (tress) was divined at Kalpeshwar.

2) Another legend states that this place was much preferred by sages of folklore for meditation. Particular mention is made of sage Arghya who through his austere penance created Urvashi, the famous apsara (nymph) at this place. Durvasa, an ancient sage, son of Atri and Anasuya, considered an incarnation of Shiva, known for his short temper did penance and meditated under the Kalpavriksha, the wish fulfilling divine tree in the precincts of the temple. Further, it is said that Durvasa had given Kunti, mother of Pandavas, a boon that "she could invoke any of the forces of nature and they would appear before her and grant whatever she desired". Once, when Pandavas, were in exile here, in order to test them Durvasa visited them along with his desciples and desired to be dined by them. Unfortunately, there was no food available with in the house to feed the surprise guests. Draupadi, wife of Pandavas, sought Lord Krishna's help. Krishna materialised on the scene and solved the problem 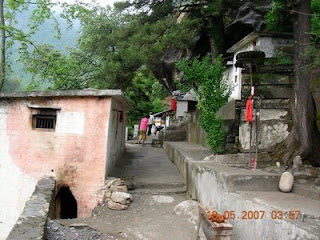 Kalpeshwar is the only Panch Kedar temple accessible throughout the year. At this small stone temple, approached through a cave passage, the matted tress (Jata or Hair) of Lord Shiva is worshipped. Hence, Lord Shiva is also called as Jatadhar or Jateshwar. It is approachable only by 12 km (7.5 mi) trekking from the nearest road head of Helong on the Rishikesh-Badrinath road. On the bridle path from Helang to Kalpeshwar, the enchanting confluence of the Alaknanda and Kalpganga rivers is seen. Kalp Ganga river flows through the Urgam valley. The Urgam valley is a dense forest area. The valley has apple orchards and terraced fields where potato is grown extensively. 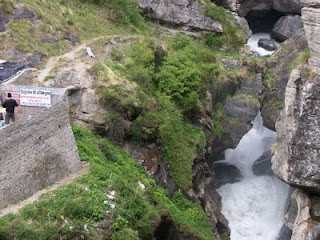 The temple priests at this temple also are the Dasnamis and Gossains, desciples of Adi Shankara. At Tungnath also the priests are Khasiya Brahmins. These priests hail from South India; the Namboodiri brahmin sect who worship at Badrinath and Kedarnath from Kerala, the Jangamas are lingayats from Mysore and the Dasnami Gossains belong to Adi Shankara’s group. The priests at the Rudranath temple are Dasnamis and Gosains.

I am enjoying reading your thoughts and seeing the pictures of these locations. You are performing a wonderful service with your blog.
I understand why you think its necessary to avoid
possibly upsetting other religions. However, I am the son of generations of Christian missionaries. By belief and by culture I will
forever be a part of that faith because it is a part of who I am and who I have chosen to be.
Having said that I am beginning to believe that
although Christians now occupy and control both
the Meteora and Montserrat Monasteries the hard
hard work it took to develope those mountain tops
were done by people of another faith who remain
famous throughout the ages for carving mountains
and art pieces that remain as a testament today of their missionary travels long ago.
One could claim that mountain tops are a beautiful place to worship--Yes, thats true.
One could claim that monks of every religion love
solitude--and thats true as well.
But how do you explain the Shiva Lingas ,the huge
stone carvings that it took to shape these locations for their intended use and lastly how these are showing up in locations where the world
knows and accepts the fact that Hindu/Buddhist
missionaries were there, may possibly have been
there or who some scholars say were there on the
basis of unsubstanciated ancient journals like the one detailing the trip of Hwai Shan from 458 AD to 499 AD?
I believe that all of the "most difficult" temples and monasteries were designed and built by the same group that built the Ellora Caves of
India. It seems to me that these man made or at least enhanced huge mountain top improvements are far too similar to have been done by anyone
else other than the people of that culture who were trained by preceding generations to do this. Last but certainly not least there were times when people hunted these people down to kill them for the bounty on their heads. Hiding in a place that was extremely inaccessible greatly improved their chances of survival.
These mountain top facilities are seen, acknowleged and appreciated all over Asia and the Indian Subcontinent. However once you leave that area the world does not want to talk about and acknowledge the obvious which is that Buddhist/Hindu missionaries travelled the
ancient world teaching their faith to interested
converts. That is why even to this day the Navajo and Hopi Native American tribes use the
Buddhist/ Hindu Manji (Swastika) in their art.

As i read your comment, I realised you are absolutely correct that most difficult to reach temples have been build by Hindu/Buddhist missionaries.

But my point is that there are temples on the top of mountains all around the world and there may be a theory behind it. Like as you said rightly, it may be for improving chances of survival.