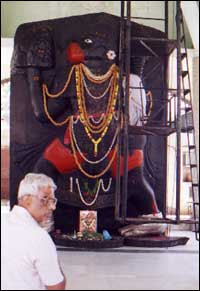 Location : The Prasanna Veeranjaneya Swamy Temple, atop a hillock in Mahalakshmi Layout in the Bangalore city.

This temple won the cleanliness award for "The Best-Maintained Temple" in 1999. In addition to its 22-foot deity Prasanna Veeranjaneya, carved out of a single monolithic rock, the temple is well known for its free medical services. The temple occupies 13 acres of land.

During the rule of Mysore Maharaja Mahalakshmipura was a nice place for shooting practice. There was an graceful huge rock upright on the top of a small hill. It was a wonderful view to see the rock from the distance. When the BDA (Bangalore Development Authority) were developing new layouts in Bangalore, Mahalakshmipura was renamed Mahalakshmi Layout.

The rock on the top of the hill was 22 feet high and 16 feet in breadth and 4 feet wide. Local residents of Mahalakshmi Layout made a majestic painting of Lord Anjaneya on the rock and the Lord Anjaneya was named as Sree Prasanna Veeranjaneya Swamy. In the year 1973 on the occasion of Ramanavami the first pooja was performed. 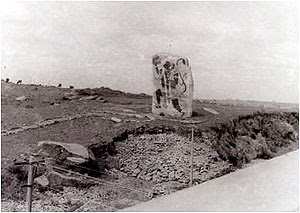 Later a committee was formed and the committee decided to have a statue of the deity of Sri Prasanna Veeranjaneya Swamy in the place of the painting. Sri Shanmugananda Stapati was the person who completed the carving of the idol ( S.Shanmugananda Sthapathi during 1974 ). This vast idol is 22 feet tall black stone.

Until the 1960s, the hillock 22-foot deity, Prasanna Veeranjaneya and surrounding area was barren. In 1968, people began to be occupy the area. In 1973, the people in the area began worshipping the rock and painted an image of Anjaneya flying with the Sanjeevini Hill. Later, the same painting was sculpted into an idol of Anjaneya in 1975 by a sculptor, Shanmugananda. Since then, people have worshipped the idol with deep reverence.

On June 7th 1976, the idol was installed with traditional ceremony, with former chief minister, Kengal Hanumanthaiah, the then Congress general secretary P V Narasimha Rao and others in attendance. A 15-member trust currently manages the temple.

Dhyanamandira silent zone for peace lovers within the temple is the Meditation Hall or Dhyanamandira. Lovely greenery surrounding the hall adds to the ambience. Colourful idols of Lord Srirama and his beloved devotee Hanuman attract the attention of devotees sitting in silence. It is believed that disturbed minds are consoled here. 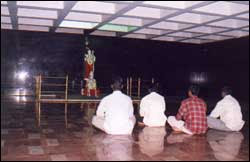 The Philanthrophic activities of Prasannaveeranjaneya Temple :

Hospital at the TempleThe Veeranjaneya Swamy Temple is well known for its free medical services. The temple's hospital has treated eye patients and conducted 730 cataract operations, while more than 616 patients have been treated for teeth problems in its dental clinic. "For a nominal fee of Rs 5, our dental clinic performs treatments like removing aching tooth, filling cement (to decayed teeth), and other dental treatments," says the temple trust founder secretary, Mr Krishnamurthy Rao, who has been associated with the temple since its inception 28 years ago. The dental clinic does not insist on the nominal fees for dental treatment if the patient is too poor to pay, says Mr Rao. 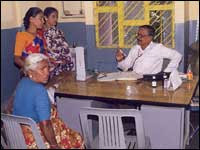 The temple hospital receives unused medicines from convalesced patients around the city area and prescribes them to its patients. Convalesced patients are happy to donate their unused medicines to the Temple. The doctors here take care while prescribing medicines to their patients. The temple hospital has a Medical Storephysiotherapist, pediatrician, dentist, and general physician in addition to the specialists visiting three to four times in a week. Every day, the hospital works from 9 am to 1.30 pm. The dental clinic is open on Tuesday, Thursday and Friday. The hospital also has a Homeopathic Clinic and a medical store. An 18-bed hall, which was opened in June 1996, is used once a month for eye cataract operations. The temple provides food to patients and their caretakers at the monthly three-day cataract operation camp.

The temple is encouraging local musicians and dancers by holding their concerts in the temple every Saturday evening from 6-8 pm. Budding artistes can register with the temple on Saturdays. The temple honors artistes by giving an honorarium of Rs 1,000 per concert. The local Mahila Samaja conducts bhajans (devotional prayers) on Sunday mornings at the temple.

Benne Alankara (decoration with butter) of the deity Anjaneya at Prasanna Veeranjaneya Temple is done every year in the month of August. For the Benne Alankara, 420 kilograms of butter is used. About 18,000 devotees contribute the butter required for this ritual. The day after the ritual, the butter is removed and distributed to the devotees as prasada. On Hanumat-jayanthi day the temple distributes fruits to about 5,000 monkeys in and around Bangalore.

The temple's anniversary is celebrated in June. Srirama Kalyanotsava and Samoohika Lakshmi Puja rituals are held as part of the anniversary celebrations. Anyone can participate in the rituals of the temple, irrespective of caste, creed and religion, says the temple's founder secretary, Mr Krishnamurthy Rao.