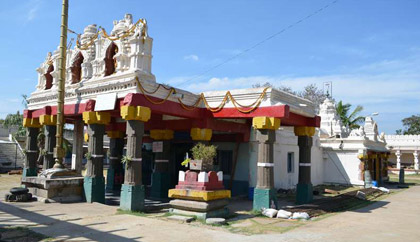 The Sri Lakshmi Venkataramanaswamy Temple is situated in the Holenarasipura Taluk, of the Hassan District in Karnataka. It is 20 kilometers away from Hassan, and about 165 kilometers from Bangalore. It is well connected by road and rail, hence getting there is easy.

When driving on the Holenarasipura highway, the Sri Lakshmi Venkatarmanaswamy temple is about 1.5 kilometers after Hassan. It offers a pleasant break from the city for those who want to get away from the concrete jungles of Bangalore for a weekend, amidst the lush greenery of the surrounding countryside and the hills.

The name Malekal and the installation of Lord Venkataramanaswamy here has got a legendary story. Devaguru Shri Vashishta lived here and went to penance worshiping Lord Venkataramanswamy for over 800 years, who in turn gave his darshan on the day of Ashada Shuddha Dwadashi. To mark this event Maharathothsava is being held every year even now. After getting Tapasiddhi with the darshan of Lord Venkateshwara left the place. As a result there was nobody to perform pooja to Lord Venkataramanaswamy installed by Devaguru Vashishta. As the days passed the ashrama built by him has perished and the statue (Vigraha) of Lord Venkataramana Swamy installed by him submerged in the earth. After lapse of thousands of year the palegar of Chithradurga who were ruling the area 800 years back. They were the devotees of Thirupathi Thimmappa i.e. Venkataramana Swamy. On one occasion Shri Thimmappa Nayaka one of the Palegar of Chithradurga had a dream of getting the darshan of Lord Venkataramana and had a direction of the lord to construct a temple for him and can have his darshan instead of Thirupathi. Thimmappa Nayaka was in fix to know the geneusness of his dream. Then lord Venkateshwara again appeared in his dream and told that he can be found on top of the hill. If the palegar follow the route along with Tulasi (Basil) male which can be found at the bottom of the hill.

Accordingly Thimmappa Nayaka found the Venkateshwara statue (Vigraha) on the top of the hill following The Thulasi male. As such the place has named after male as Malekallu and with a result the Palegaras can have the Darshan of Lord Venkataramana instead of at Thirupathi. Hence that has been named as Malekallu Thirupathi. The temple is on the top of the hill and it has got over 1200 steps. 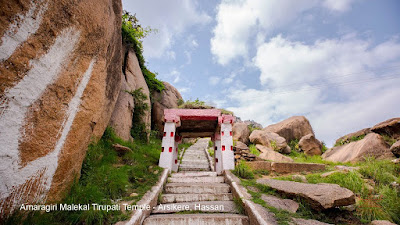 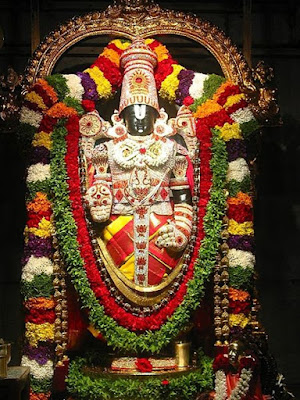 As such the temple on top of the hill was called as Amaragiri Tirupathi and the temple at the down hill has been called as Govindaraja Pattana (town).

Another important aspect of the place is that while at Thirupathi Lord Venkataramana is installed ALONE on the hill top and the Govindaraja Swamy at the down hill, At Malekallu Lord venkataramana and goddess Padmavathi are installed TOGETHER on top of the hill. Newly wedded couples visit the temple to seek the blessing from Lord Venkatramana and Goddess Padmavathi.  Kalyanotsava is a major performance of ritual happening here witnessed by thousands of devotees. There will be pooja performance in the temple every day from morning 7 AM to night 8 PM.

The temple serves as a family deity for surrounding villages and enjoys the patronage of the locals. The two festivals celebrated with great pomp and splendor is Hanuman Jayanthi and Vaikunta Yekadashi. No one knows when and how this deity was formed though it is rumored to have been consecrated by the great Vasishta. This temple can be visited throughout the year, and an ideal time to go would be during September to March, as the weather will be pleasant.

Ugadi festival, Shriramanavami, Dodda Garudotsava, Asahada Shuddha Dwadasi, Ashada Shuddha Triyodasi and many more festivals are conducted here with great grandeur. The annual Brahmotsavam is held every year and it is celebrated with great pomp and splendour.