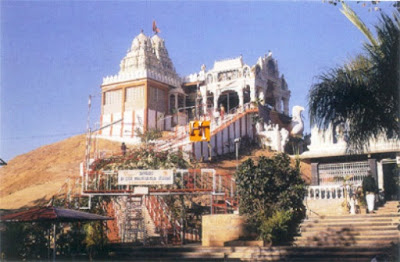 Sudharma was a peasant and kind woman who always helped the needy and in distress. She was a dharma chintamai and use to feed who ever comes to her house and had the practice of eating only after offering food to the visitor. She was given on marriage to the son of a palayakar in the outskirts of present Bengaluru. The daughter-in-law of a Palayakar was not liked by her mother in law. While Sudharma is generous and ever ready to help one and all, her mother-in-law was just oppose to all these. Sudharma was liked by all and the people use to bless her for her good nature and tell her that she will definitely be blessed by God.

One fine day just after the harvest, they had three visitors who were extremely bright and ‘tejasvi’, asking for biksha standing on the doorway of the house. Sudharma was too pleased to give some newly harvested ragi to these maha purush. [There is popular belief that the Ragi grain is blessed by Sri Raghava [Sri Rama] and Sri Kapila maharishi and hence the grain is also known as ‘Raghava Dhanya’.] At the sight of this, her mother-in-law became furious and said that the new grains cannot be offered as biksha to strangers. When Sudharma insisted to part with the ragi grains which she had already offered to them as biksha, her mother-in-law became more furious. The three ‘tejasvi’ purush stood there watching this. Sudharma told her mother-in-law that once the ragi grains had been offered as biksha it cannot be taken back, and it is an adharmic act. Mother-in-law stood her ground and refused the biksha to three maha purush. Sudharma felt that if the ragi grains could not be offered to these maha purush for food, the grains are of no use to her either. The moment she thought so, the heap of newly harvested ragi grains turned to stone and looked like a small hillock. Three maha purushas gave dharshan to Sudharma as Sri Brahma, Sri Vishnu, and Sri Mahadev and blessed her. And as per Sudharma’s wish stood there to bless one and all who come there seeking their blessings.

The heap of ragi grains turned into hillock use to be called as Raghava dhanya guddi then in the course of time it became Rahava guddi and now Ragigudda. The ‘trimurti’ who came there and is part of the incident is present to bless us all as per the wishes of Sudharma.

The huge temple complex is a feast to the eyes from the distance and enhances the devotee’s purity of mind. The complex could be seen built on ground level, at a smaller peak on the right of the main peak and at the main peak of the hillock.

At the ground level there is an office building on the left, a Prasad hall, a huge open air auditorium right in the front. Behind one can see goshala and through the passage that leads the devotee to have dharshan of ‘trimurthi’. On to the right side in the middle of the hillock one could see a temple complex with three vimana and devotees can have dharshan of Sri Ganapati, Sri Rajarajeshwari and Navagraha. The uniqueness of the Navagraha in this temple is that all the navagrahas are seen with their consort and mounted on their respective vahanas. The Sun is seen with his consorts Usha and Chaya in the higher pedestal on the chariot driven by seven horses.

Beautifully carved out Trimurties on single platform of 32 ft. tall monolithic blocks are seen in this Ragigudda temple complex. The devotees have the dharshan of Trimurties and seek the blessings in this kshetra Ragigudda.

The sannadhi of Sri Prasanna Anjaneyaswamy is on the top of Ragigudda. The temple at the top of the hillock if seen from one angle it will be seen as if the temple is on the back of an ‘annapakshi’ [a celestial bird] and floating in the air. 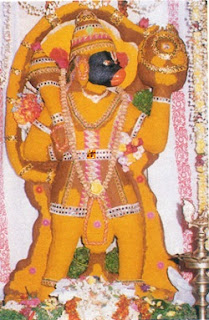 There is a separate step on the left that leads the devotee to the top of the hillock where Sri Hanuman’s sannadhi is present. After claiming around one hundred and fifty steps we land in a fairly big porch. In the centre we see big round pillar with lotus petal. One can see the main prakara on the left side. A huge wooden engraved arch way with Lord Hanuman in the centre and Sri Rama parivar on the right and Sri Siva parivar on the left is feast to the eyes of the devotee. In the sides of the arch way ‘dasavathara’ of Lord Vishnu is engraved.

Devotee could see Lord Hanuman from the entrance itself. Lord Hanuman is seen with Sanjeevi Mountain on His left hand and in the right hand He holds a ‘gadha’ [mace] which is resting on His right shoulder. Lords’ tail is seen raised above His head and resting on the Sanjeevi parvath. He has put forward his left leg indicating that He will stamp down evil doers. Lord is seen wearing ornaments on His ankle, leg, hip, wrist, hands, chest, and neck. Lord’s head is covered with an ornamental crown. His ears has rathna kuntalam, on His forehead is urdha pundarikam. Lords eyes are seen glowing with karuna.

The annual function of this temple is Sri Hanumath Jayanthi which is celebrated on a grand scale. The twelve days mahotsava attracts huge devotees. There will be special poojas, abhishekams and homas during these days. Large numbers of devotees are served mahaprasada during this annual function.

http://www.geocities.ws/hanumantemples/kar/kar2.html  - All credit goes to Ms. Bawani Karthik, Coimbatore
Posted by Rajesh. CTR at 6:22:00 AM