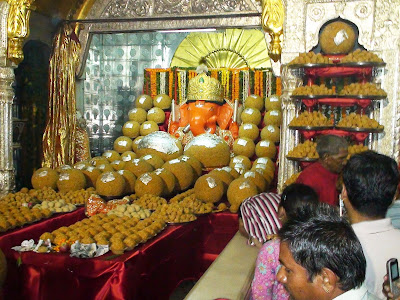 Situated in the heart of Jaipur of Rajasthan, the Moti Dungri temple is perched on a small hill, and is surrounded by an exotic palace.

The Moti Dungri Ganesh Temple was constructed by Seth Jai Ram Paliwal in the early eighteenth century, and continues to be one the most popular tourist destinations in Jaipur. The temple is nestled by the beautiful palace, called the Moti Dungri palace, which is an imitation of a popular Scottish castle. In the recent past, the palace was home to Rajmata Gaytri Devi, but now, the palace is locked to public.

History Of The Temple :

According to the priests of the temple, the King of 'Mewar' was returning back to his palace from a long journey and was carting a colossal 'Ganesh' idol on a bullock cart. It is said, that the king wanted to build a temple, and had decided to consecrate the idol of Lord Ganesh wherever the bullock cart halted the first time. Legend states that the bullock cart stopped at the foot of the Moti Dungri hills, which is where the temple is situated today.

It is said that the construction and the design of the temple was commissioned to Seth Jai Ram Paliwal, who supervised the construction of this magnificent structure, on the inspiration of 'Mahant' (chief priest) Shiv Narain Ji. The temple was originally built to house the 'Ganesh' idol, with only the 'Shaiva' (Lord Shiva followers) visiting the temple. Thereafter, the palace complex was built, encompassing the Moti Dungri Ganesh temple within it, making it a popular religious and tourist center in Jaipur. 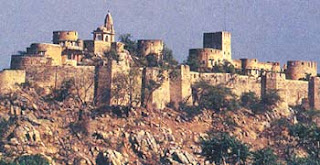 Layout Of The Temple :

The temple itself spans 2 kilometers and is carved out of stone. Apart from the intricate stone carving, the temple is known for its exquisite lattice work on marble with mythological images engraved on the marble, which offer a splendid view for art-lovers. The idol of Lord Ganesh is located in the heart of the temple, and is hidden from view. Only at certain timings in a day are visitors allowed to have a glimpse of the feted idol.

From 'Ganesh Chathurthi' to 'Paush Bada', the temple is always bustling with the preparations of festivities and is a landmark destination in Jaipur. The mela (fair) held on the temple grounds every Budhwar (Wednesday), Ganapati’s day.

Everything is big in Jaipur, from its palaces and hotels to its temples and laddoos. Yes, laddoos! Locals, tourists and devotees visit the Moti Doongri temple during Ganesh Chaturti in huge numbers. Among the many offerings made by them, the most fascinating is the motichoor laddoos, some weighing even a kilo.

http://www.jaipur.org.uk/temples/moti-dungri.html
Posted by Rajesh. CTR at 7:01:00 AM

hi,
Thanks for shear this article, its very interesting your article. and click this findmystay.com

I want to go to a Hindu temple?
Hindu Priest