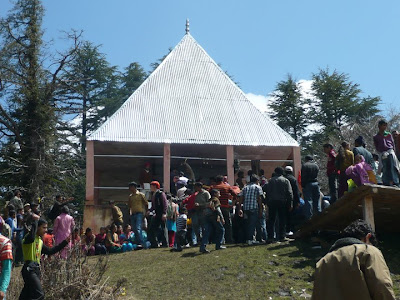 This Temple is considered to be a symbol of the Nag culture, which prevailed in the state centuries ago.
The presiding deity in the temple is a serpent Subar Nag and devotees, is believed to be around 700 years old and the tradition of holding the festival has been going on since 200 years.

Bhadarwah is known for its ancient and unique Nag Culture and Nag Puja is an important aspect of Bhaderwahis culture. The Yatra has been going on for over thousands of years and people from all communities, including Muslims, have immense faith in the Serpent goddess. The temple was however burnt by militants in the mid nineties when the militancy in the whole of Jammu was at its peak. A new temple has been constructed there now. This temple situated amidst of thick coniferous forest is visible from Thubba village.

In the month of April on 12th or 13th, every year, a grand mela is held at Subar Dhar in honour of Subar Nag in which thousands of Bhaderwahis pay obeisance. Dhar in Bhderwahi language means hill and Subar is for Subar Nag or Shesh Nag.Subar Dhar is spread over a large area comprising Chinta, Bhalra, Bedota, Chiralla and other adjoining villages.

The Yatra begins with opening of ‘Dara’ (gate) of Nag temple at Subar Dhar on last day of Chet every year. The temple is closed before onset of winter that experiences heavy snow fall making it virtually impossible to reach the place.

Some people like to do this yatra in their own small groups, while some prefer to join the 'mala' that leaves from some villages like Dugga Chinta, Bhalra etc. In the early morning the 'nishanis' are taken out from the local 'Nag' temple washed, decorated and are taken to the Subar Nag temple by the local pandit accompained by hundreds of yatris, who chant 'Jai Subar Nag' 'Jai Subar Nag' on the way to Subar Dhar.

On that day huge procession of devotees belonging to Bhadarwah and its surroundings villages converges at Subar Dhar temple. They perform Puja of Subar Nag and then  dance on the sprawling hill  amidst blooming mountain flowers and flocks of flying butterflies at the enchanting tunes of traditional music played upon large drums and pairs of flutes. This is followed by Puja of Vasukinag at Vasak  Nag temple is performed at Gatha temple.


Some families visit Subar Dhar to offer 'sukhan' (animal sacrifice) to their 'kul devta'. They take out their family yatra along with some relatives. Some visit to perform 'mundan' ceremonies of their children.
On the next day Baisakhi (Bashaki) Mela is celebrated at Nagni Temple near Manthla village where thousands of people participate.

During this time some pilgrimages are also undertaken. And Kailash Yatra and Manimahesh yatra are some of them.