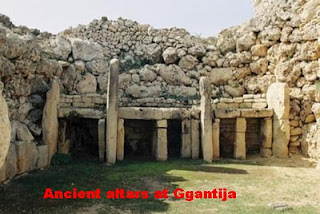 The largest megalithic complex in the Maltese islands, Ggantija stands high on the southeast slope of Xagħra hill, overlooking Ramla valley, southern Gozo, and beyond to Malta, five miles away. The site is composed of two temples spanning more than 120 feet, and enclosed by a single huge outer wall, which reaches almost twenty feet in height.

According to an ancient legend, the temple walls were built in one day and one night by a female giant named Sunsuna, who did it while nursing a baby. Ggantija is Maltese for "giant's grotto."


According to archaeologists, the Ggantija temples were dedicated to the Great Earth Mother, a goddess of fertility. Evidence indicates there was an oracle here, as at the much-later Temple of Apollo at Delphi. A priestess prophesied while in a trance, possessed by the spirit of the goddess. Ggjantija also seems to have been a place to pray for healing.


In ancient times, the temples dedicated to the Mother Goddess at Ggantija drew pilgrims from across the island and even from North Africa and Sicily. 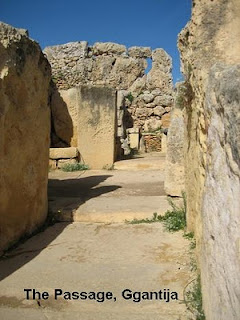 The two temples of Gjantija are estimated to be 5,800 years old (built between 3600 and 3000 BC). One of them is the oldest stone structure in the world, predating Stonehenge and the Great Pyramids by hundreds of years. Round in shape and containing statues of full-figured goddesses, the Ggantija temples were dedicated to the Great Earth Mother and probably included an oracle. The site was a place of pilgrimage for the ancient inhabitants of Malta.


In addition to being the oldest, the Gjantija temples are the most complete shrine complexes on Malta. The two temples cover a total of 10,000 square feet. They are surrounded by a common wall, which reaches up to 17 feet, and they share a forecourt.


As with many megalithic sites, it is hard to imagine how these ancient peoples were able to hoist stones weighing several tons into place. The slabs may have been rolled into place on "roller stones" about the size of cannon balls, which have been found on the site.


The Ggjantija complex is characterized by round, curved architecture, reflecting a powerful, full-figured Mother Goddess. The two shrines themselves suggest the body of the Earth Mother, with broad hips and full breasts. The ritual rooms are round, and it is thought that the priestess entered symbolically into her Mother's womb and returned reborn. The temples were roofed with great domes, painted in red on the inside.


Each temple consists of five apses connected by a central corridor that leads to the innermost trefoil section. The first temple to be built is larger and has niches with altars, relief carvings and libation holes. The second has none of these features.


The large common forecourt may have been where congregations gathered to attend rituals, while the inner rooms of the temple were reserved for the priestess.


Many of the doorway slabs have round holes carved in them. The purpose of these is uncertain, but they may have held wooden rods on which fabric was draped to create curtains or screens. More holes can be seen in some floor slabs, but these do not go all the way through and were almost certainly libation holes for holding liquid offerings. 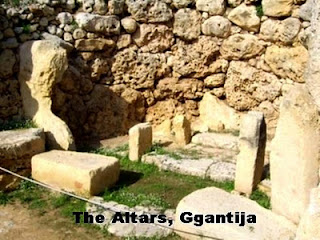 The altars in the larger temple are trilithons; that is, made of three stones to form a vertical surface. There is evidence of animal sacrifice on these altars, most of which have been reconstructed. Another interesting feature is the evidence of a sacred fire - a stone hearth, some paving stones of which have been reddened by fire, can be seen on the floor of the inner right-hand niche of the larger temple.
A few artifacts have been found at the site, which are now displayed in the national museum. They include a small clay figure of a full-figured sleeping goddess that was found in an egg-shaped chamber. Some architectural decoration can still be seen in its original position in the temple, including three stone blocks with spiral carvings and several stones with decorative pitting.

Full details with visitor information can be seen at website below