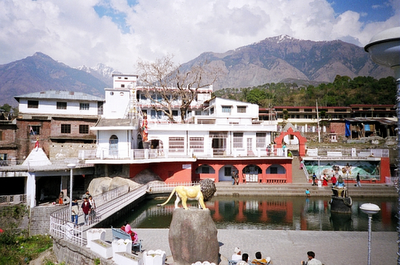 Location : In the Kangra District of Himachal Pradesh, around 10 kilometres (6.2 mi) west of Palampur

The legend of the temple is related with two demons Chanda and Munda of Shumbh Nishumbh, the notorious demon king. With their wicked mind, they try to harass the goddess Ambika, which turned out in the form of battle between the gods and demons. Chamunda, emerged as Chandika from an eyebrow of goddess Ambika, was assigned the task to eliminate the demons. Chandika destroyed those two demons and presented their heads in front of Ambika. Pleased with the act of Chamunda, the goddess Ambika named the city as Chamunda and since then the temple Chamunda Devi is worshipped with that grace and faith.

The temple is located on a hill overlooking the town of Chamba and is a 30 minutes climb. This temple is dedicated to Chamunda, the enraged form of Goddess Durga. The entire wooden ceiling of this temple is embroidered with elaborate carvings portraying floral motifs and different deities.

At the back of the temple is a cave-like scoop where a stone "Lingam" under a boulder represents Nandikeshwar (Shiva). The temple complex is an enchanting spot with glorious view of Dhauladhar, the Baner Khad and Dadh. A 700 years old temple, Chanmunda Devi comprises of big complex with a 'Kund' (Ban Ganga)in it.

Taking dip in the Ban Ganga river is considered as more auspicious and sacred. People perform prayer to Lord Shiva with the water of Ban Ganga river. As per the rituals, the devotees coming to the temple take holy dip in the Kund. The main deity of the temple is kept under cover and is not accessible by the visitors, because of its sacred importance.

A trek of about 16 km up in the Dhauladhar ranges is the ancient temple of Aadi Himani Chamunda.

The Sui Mata Temple is located between the Chamunda Devi temple and Brajreshwari Devi temple, and is dedicated to Sui Mata. She is believed to be a local princess, who gave her life for the people in Chamba. Colorful paintings within the temple depict the life of Sui. Other temples to visit in Chamba are the Radha Krishna Temple, Harirai Temple, Sitaram Temple and Champavati Temple .

Beside temple, there is Ayurvedic dispensary, library and a Sanskrit college situated in the temple complex. The dispensary provides medical treatment to the pilgrims and locals. The library comprises of rare stock of old manuscripts, books on astrology, Hindu philosophy, Vedas, Puranas, Upnishads, Sanskrit and History. There is book sale counter, which provide these books on reasonable rates.

A Sanskrit college is also run by the temple trust and they organize free classes on Vedas and Puranas.

A fentastic and superub site which is very very useful for the people for all ages. Realy i have not seen such a very useful sight ever before.
Hats off to your great effort .please keep going.
Subramanian,
Chennai

Thanks for your appreciation Subramanian